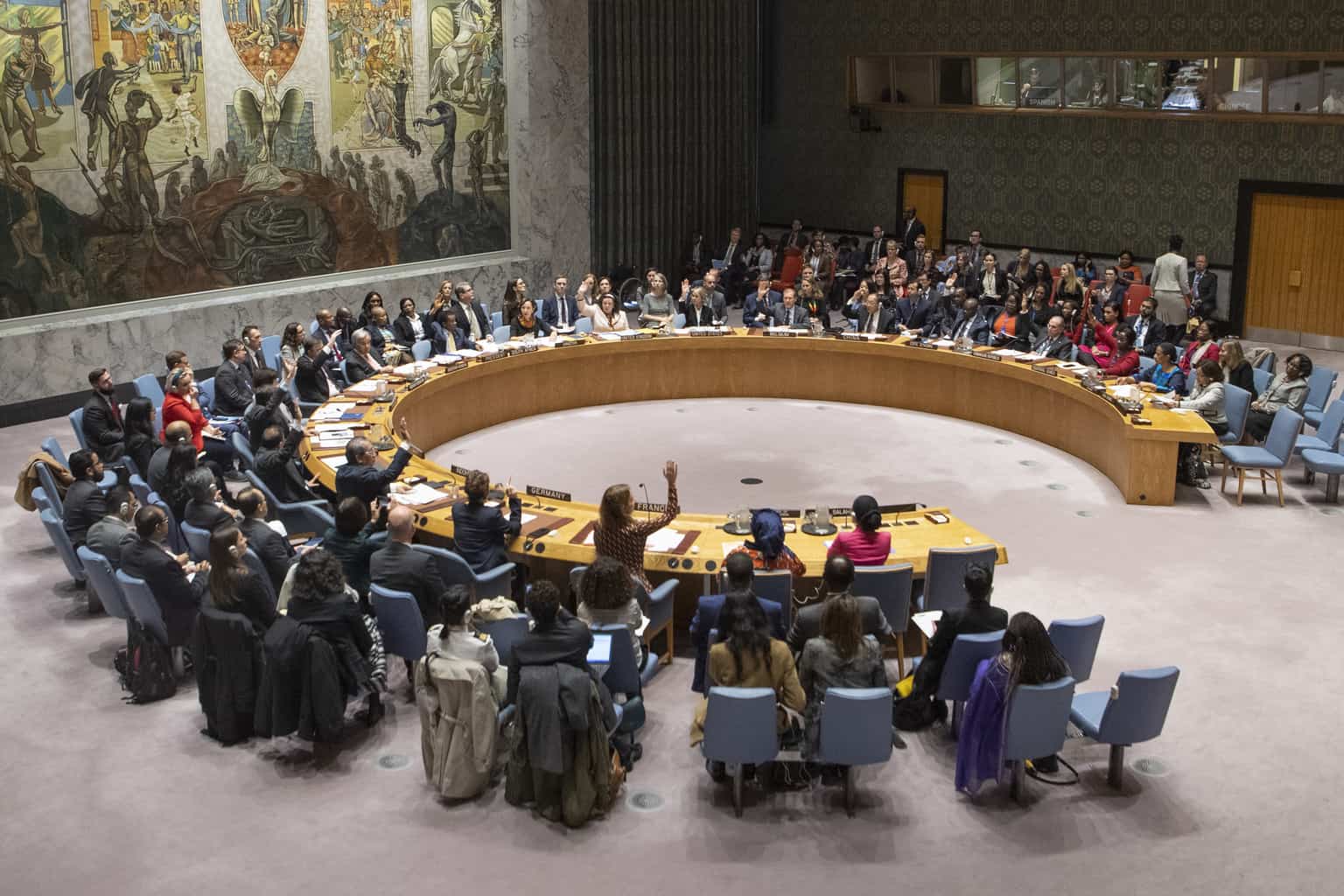 On 29 October 2019 the annual open debate on women, peace and security (WPS) was held by the UN Security Council under the presidency of South Africa on the theme of “Towards the successful implementation of the women, peace and security agenda: moving from commitments to accomplishments in preparation for the commemoration of the twentieth anniversary of Security Council Resolution 1325 (2000)” (S/2019/801). Briefings were delivered by Secretary-General António Guterres, UN Women Executive Director, Phumzile Mlambo-Ngcuka, and African Union Special Envoy for Women, Peace and Security, Bineta Diop; followed by two civil society briefers, Lina Ekomo of FEMWISE (the Network of African Women in Conflict Prevention and Mediation) and Sudanese activist Alaa Salah, who spoke on behalf of the NGO Working Group on Women, Peace and Security (NGOWG) (S/PV.8649).

The open debate also marked the passage of Resolution 2493 (2019), making it the tenth in the WPS pantheon. Due to a combination of factors such as UN budget cuts and the long list of speakers, the open debate was paused after one day and resumed on November 4, under the United Kingdom presidency of the Security Council.

Interventions during the open debate

At the debate, Alaa Salah, Sudanese activist and a member of MANSAM, a coalition of Sudanese women’s civil and political groups, delivered a statement on behalf of the NGOWG. Salah, who was catapulted into fame when a photograph of her during the revolution went viral earlier this year, was joined in New York by a broader delegation of Sudanese feminist activists with expertise on Darfur, youth leadership, women’s participation, accountability and development. Salah’s statement, developed in consultation with women’s groups in Sudan and in collaboration with the NGOWG, addressed a variety of key issues for women in Sudan, including the necessity of women’s meaningful participation in the ongoing peace and political processes; protection of women’s rights; women human rights defenders and civil society space; and the importance of accountability for crimes committed before, during and after the revolution. She also underlined that the strength of the revolution came from the representation of diverse voices from across the country, and how this inclusivity is integral to the legitimacy of the transition process.

“Unless the political process reflects and embraces the diversity of our society, women groups, civil society, resistance groups, ethnic and religious minorities, those who have been displaced, and people with disabilities—no agreement will reflect our collective aspirations.” – Open debate statement delivered by Alaa Salah, on behalf of the NGOWG

The remarks focused on how women have been side-lined in the formal political processes post-revolution, despite their active role in defending human rights and working for peace, their leadership in the recent protests, and their important contribution to shaping the Declaration of Freedom and Change – a roadmap for Sudan’s transition to civilian rule. The statement described how women have surmounted many of the barriers to their participation in public and political life, ranging from active repression and violence by the former regime as well as security forces, to entrenched discrimination in both law and policy as well as in their own communities. Salah urged the international community to support a crucial demand of women’s groups in Sudan: 50% representation of Sudanese women across all peace processes, in the current negotiations, and at all levels of the government.

“If we are not represented at the peace table, and if we don’t have a meaningful voice in parliament, our rights will not be guaranteed, and discriminatory and restrictive laws will remain unchanged, continuing the cycle of instability and violence.” – Open debate statement delivered by Alaa Salah, on behalf of the NGOWG

The statement also echoed many of the core demands of civil society expressed in the annual open letter prepared by the NGOWG prior to the debate. Published on 22 October, the NGOWG civil society letter to all UN Member States was endorsed by 438 organizations representing 94 countries around the world. The letter, which outlines five key messages for Member States in advance of the 20th anniversary of Resolution 1325 (2000) next year, emphasized the need for accountability of UN leadership and Member States for full implementation of the WPS agenda. It highlights the importance of shifting attention from crisis response to prevention, for women’s participation to be non-negotiable, and for the WPS agenda to be firmly rooted in women’s human rights and gender equality. Describing the global rise in political violence against women, as well as the permissive context created by homophobic and misogynistic speech by well-known political leaders, the letter urges action on one of the most critical gaps in the Security Council’s agenda: recognition of the role women human rights defenders play in building peace and the need for dedicated protection in order for them to safely and effectively carry out their important work. In their statements during the open debate, several Security Council members as well as other Member States reiterated calls from the NGOWG’s open letter, on issues such as sexual and reproductive rights, women’s participation, and the recognition of the important work done by civil society and women human rights defenders. The role of civil society and women human rights defenders, which proved to be one of the most contentious issues during the negotiation of Resolution 2493 (2019), received strong mentions in statements by the UK, France, Belgium, Germany, the Dominican Republic, Norway, Mexico, Panama and Lebanon, among others.

The open letter also reiterated some of the findings of an independent assessment of implementation of recommendations from the three peace and security reviews carried out in 2015, on which this year’s annual report of the Secretary-General on women, peace and security was based (S/2019/800). Some of the key findings of the assessment were that only 50% of the recommendations on WPS have progressed and only two recommendations out of 30 were fully implemented. These findings were reiterated by Under Secretary-General Phumzile Mlambo-Ngcuka, who in her statement during the debate highlighted that “from 1990 to 2018, less than 20% of peace agreements included provisions addressing women or gender. And last year, none of the agreements reached in UN-led processes included provisions addressing women.” Publication of the findings of the independent assessment is expected soon.

Resolution 2493 (2019) was adopted unanimously on the morning of the open debate. The role of civil society and protection of women human rights defenders, as well as sexual and reproductive health and rights, emerged as two of the most difficult issues during the negotiations. These issues, among others, had also proved divisive in April 2019, when the Security Council adopted Resolution 2467 (2019) under the German presidency — it was the first time a WPS resolution was not passed by consensus, with two abstentions from China and Russia, respectively. Sexual and reproductive health and rights, (opposed by the United States), as well as civil society and human rights defenders, (opposed by China and Russia) were often raised in the course of the recent negotiations. Overall, although Resolution 2493 (2019) raised concerns that it set a less than ambitious tone for the 19th anniversary of the WPS agenda, it affirmed Security Council consensus and cross-regional support around the existing normative framework.

U.S. Ambassador Kelly Knight Craft noted in her statement after the vote that the United States “cannot accept references to ‘sexual and reproductive health,’ nor any references to ‘safe termination of pregnancy’ or language that would promote abortion or suggest a right to abortion.” The unanimously-adopted text contains references throughout to the “full” implementation of the WPS agenda, an important validation of all provisions of previous WPS resolutions – including previous references to sexual and reproductive health and rights – and was reiterated in statements by several states, such as South Africa, the United Kingdom, and Belgium, the latter which was the only country to explicitly and positively mention abortion. In her statement, Ambassador Craft referred to the NGOWG’s open letter and its call to defend the work of human rights defenders and mentioned that the United States “agree[d] that women’s full, effective and meaningful participation […] must be non-negotiable and safeguarded.” She, however, neglected to mention that the NGOWG’s letter also calls for full implementation of the agenda, including sexual and reproductive health and rights, and underlines that failure to protect these rights undermines all pillars of the WPS agenda, including women’s ability to meaningfully participate in public life.

Similarly, although both countries voted in favor of the resolution, Russia and China’s statements following the vote referenced some of the points of disagreement that arose during the negotiations such as the role of the Informal Expert Group on Women, Peace, and Security (IEG) and of civil society, as well as language around the protection and promotion of human rights. Russia stated that although it had voted in support of the resolution, the text was “oversaturated with issues of protection and promotion of human rights” that went “beyond the Security Council’s mandate.” Both China and Russia attempted to undermine the role of the IEG, with Russia claiming it was “politicized” and China stating that its decisions were not binding because it was not an official body of the Security Council. China also stated that NGOs were “expected to play a constructive role by observing the laws of the countries concerned,” reflecting an issue that nearly derailed negotiations, and claimed to “reserve its position vis-à-vis operative paragraph 6 of Resolution 2493 (2019),” which refers to the role of civil society and human rights defenders and their ability to carry out their work independently, without undue interference.

The finally adopted resolution marks modest advances in the normative framework on WPS in the areas of women’s participation and civil society. The resolution introduces strong references to women’s “full, equal, and meaningful” participation. Previous WPS resolutions rarely contained equally strong references to equal and meaningful, both of which are critical to reinforcing a rights-based approach to women’s participation. Inclusion of these terms underlines the need for structured and formal inclusion of women, so that they are in decision-making positions and have influence over the outcomes of the processes that they are participating in, both of which were identified as key requirements during an Expert Group Meeting on this topic in 2018. Disappointingly, as with Resolution 2467 (2019) passed in April, explicit references to women human rights defenders in Resolution 2493 (2019) were eventually removed in the name of securing consensus; the final text, however, now contains an important reference to a “safe and enabling environment” for civil society, women leaders, peacebuilders and politicians, as well as those who “protect and promote human rights.” This indirect reference to human rights defenders, as well as recognition of the importance of a broader legislative and political environment to allow them and other civil society to carry out their work, references a key concept encapsulated by the UN Declaration on Human Rights Defenders and developed by subsequent Special Rapporteurs on the situation of human rights defenders. In the context of the Security Council, this represents a positive advance. The subsequent reference to ensuring they can carry out their work independently and without “undue interference” is also a positive, if indirect reference, to the need for protecting human rights defenders and peacebuilders from reprisals for carrying out their work, which are currently on the rise (A/HRC/42/30). Importantly, the language in this respect is not limited to only conflict-affected situations, but also to countries not currently affected by conflict. There are also several references to civil society’s importance generally, which reflects divides among Council members during negotiations on how to reflect their vital contribution to the implementation of the WPS agenda.