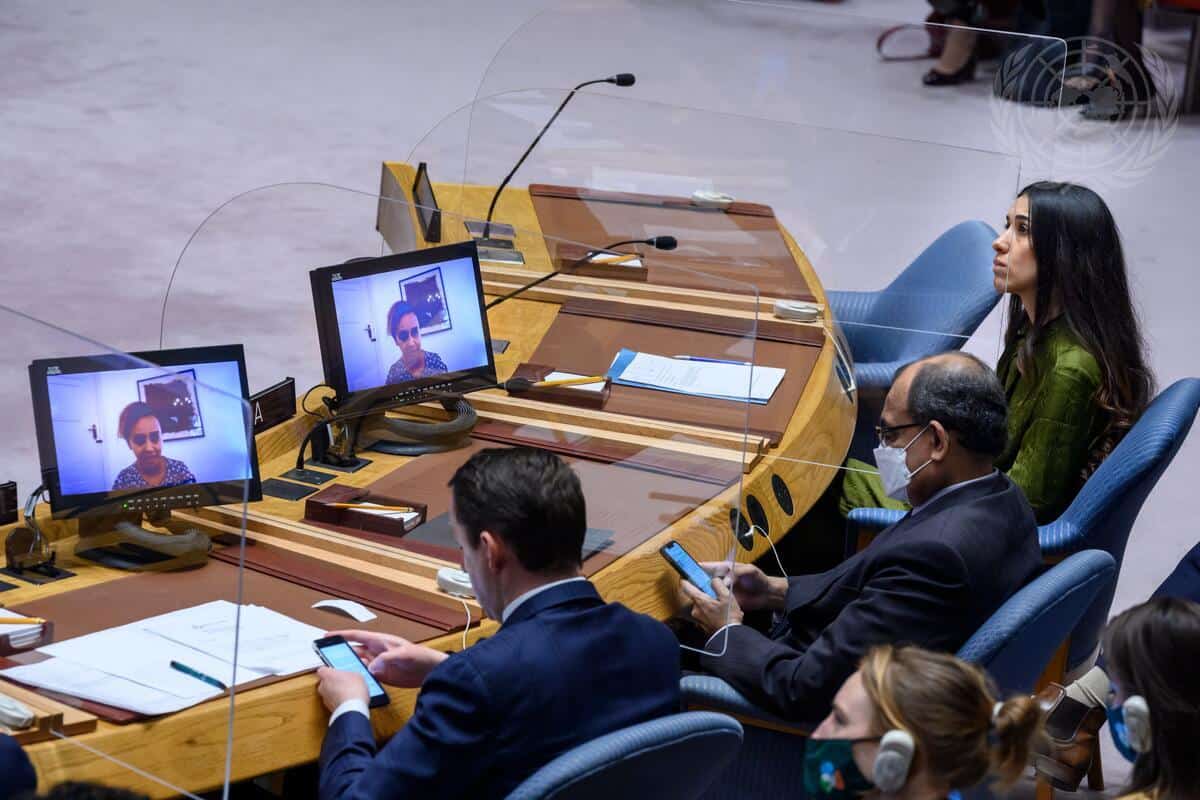 This statement was made by Ms. Hilina Berhanu Degefa, researcher, gender policy expert and Co-founder of the Yellow Movement AAU, at the United Nations Security Council Open Debate on Sexual Violence in Conflict.

Thank you for allowing me to bring the stories of Ethiopian women to the chamber of the Security Council.

I speak to you today as an Ethiopian woman: one who has heard these testimonies and seen these injuries firsthand in Tigray; one who carries the guilt of survival and silence. Today I hope to do justice to the experiences of millions of Ethiopian women who have suffered in this devastating war.

In this briefing, I will focus on six points in relation to conflict-related sexual violence in Ethiopia since the war began in Tigray in November 2020 and expanded to neighboring regions of Amhara and Afar. These points are drawn directly from human rights investigations and reports that have been made public, as well as my own visits to the region.

First: rape has been perpetrated systematically, and used as a tactic of war. It is framed as a means of reprisal for perceived past wrongs, and leveraged as a bonding tool for members of allied military forces.

When the war first started, Blen a 21-year-old waitress from Badme, along with around 30 other Tigrayan women, was held against her will and subjected to sexual slavery, starvation, and gang rape by a group of Eritrean and Ethiopian soldiers who took turns with her. I documented many other stories like Blen’s during multiple visits to the Tigray region before June 2021. Sexual violence was used to terrorize communities and build camaraderie amongst allied forces of Eritrean Defense Forces, Ethiopian National Defense Force and Amhara regional militia and special forces through the shared experience of exploiting women’s bodies. The consistency across victims’ accounts shows that these crimes were committed with a degree of organization, planning, and intent to dehumanise individuals and communities.

A Tigrayan woman was fleeing the conflict zone with her children. Along the way, she encountered the Amhara militia, who separated her from her family, gang raped her and inserted a hot metal rod into her uterus. They declared: “a Tigrayan should never give birth.” Similar incidents of rape with claims of cleansing “Tigrayan blood” and mutilating women’s bodies to prevent the birth of more generations of Tigrayans have been extensively covered by different human rights reports.

Third: sexual violence is being used to humiliate survivors and their families.

Sexual violence has often been perpetrated in front of family members. An Amhara woman was beaten and raped in the presence of her husband and child by two members of Tigrayan forces. She and her child witnessed her husband being killed as he tried to stop the assault.

Men and boys were also sexually assaulted. The Ethiopian Human Rights Commission found in Samre town, in Tigray, 600 men and boys were stripped and forcibly paraded, some completely naked, while Eritrean female soldiers mocked them and took pictures.

Fourth: women with disabilities, and other vulnerable communities have been at particular risk during this conflict.

Many women with disabilities were specifically targeted in the Tigray region as they were presumed to be fighters in the previous war. Girls, elderly women, and women belonging to a minority or indigenous communities also faced higher risks. The lack of access to the region for independent human rights monitoring means it has been particularly difficult to document the impact of the conflict in minority communities and especially those living in disputed areas on the Eritrean border, such as the Irob and Kunama in Tigray.

Fifth: the conflict in Northern Ethiopia, and the effective siege of the Tigray region, in particular, has undermined women’s rights, including access to reproductive healthcare and psychosocial support, exacerbating the impacts of sexual violence.

In May 2021, I visited a shelter supported by Mekelle University, where many lactating mothers and their infants had taken refuge. These women – some of whom had survived sexual assault while pregnant – could not access timely sexual and reproductive care, in part because of the widespread destruction of medical facilities and limited deliveries of aid due to the government blockade of the region.

The conflict in Northern Ethiopia has increased women’s vulnerability irrespective of their ethnicity. I carry with me the story of Kadija, a nine-month pregnant woman from Afar, who fled the shelling of the town of Aba’ala by Tigrayan Defense forces with her five children and elderly mother. She gave birth under a tree after having walked for nine days, two of which while in labor. In a country with one of the highest maternal mortality rates globally and lack of medical infrastructure in pastoralist areas, the conflict immediately puts the lives of many Ethiopian women in grave danger.

Lack of access to psychosocial support services means that the mental health of survivors of sexual violence hangs in the balance. Many have already died by suicide. The story of a 50-year-old Amhara woman from Shewa-Robit in central Ethiopia, who was gangraped by Tigrayan fighters in the presence of her son in the next room and later died of suicide, highlights just how tragic and ruinous the situation is. Preliminary reports also indicate disproportionate rates of suicide amongst Internally Displaced Persons across different parts of Tigray. And amidst total internet and telecoms blackout, I fear the extent of the trauma felt by the community remains unknown.

Mr. President, members of the Council,

The central theme of today’s open debate is accountability for sexual violence. Security Council resolution 2467 recalls the critical role of national investigations. The Ethiopian Human Rights Commission and UN office for Human Rights were able to conduct a joint investigation which was limited in scope and analysis. But unfortunately, more broadly, we have witnessed deliberate delays of investigation, withholding of information, failure to follow up by the justice system, and destruction of evidence, including statistical records and harassment and detention of journalists, by the Ethiopian state and allied parties to the conflict. As we have seen in other contexts and in the spilling of this war into the broader Northern region, lack of accountability and justice for past crimes continues to fuel a sense of grievance that drives a vicious cycle of retaliatory attacks.

Based on the trends and stories that I have highlighted; I would like to offer the following recommendations to the members of the Security Council:

Excellencies, this war has been so devastating to witness—first, because of the sheer scale of human suffering and, second, because of how many Ethiopians defended this violence in the name of patriotism. But my patriotism, my political loyalty, and my allegiance lie exclusively and firmly with Ethiopian women, and I thank you for inviting one of them to speak to you today.