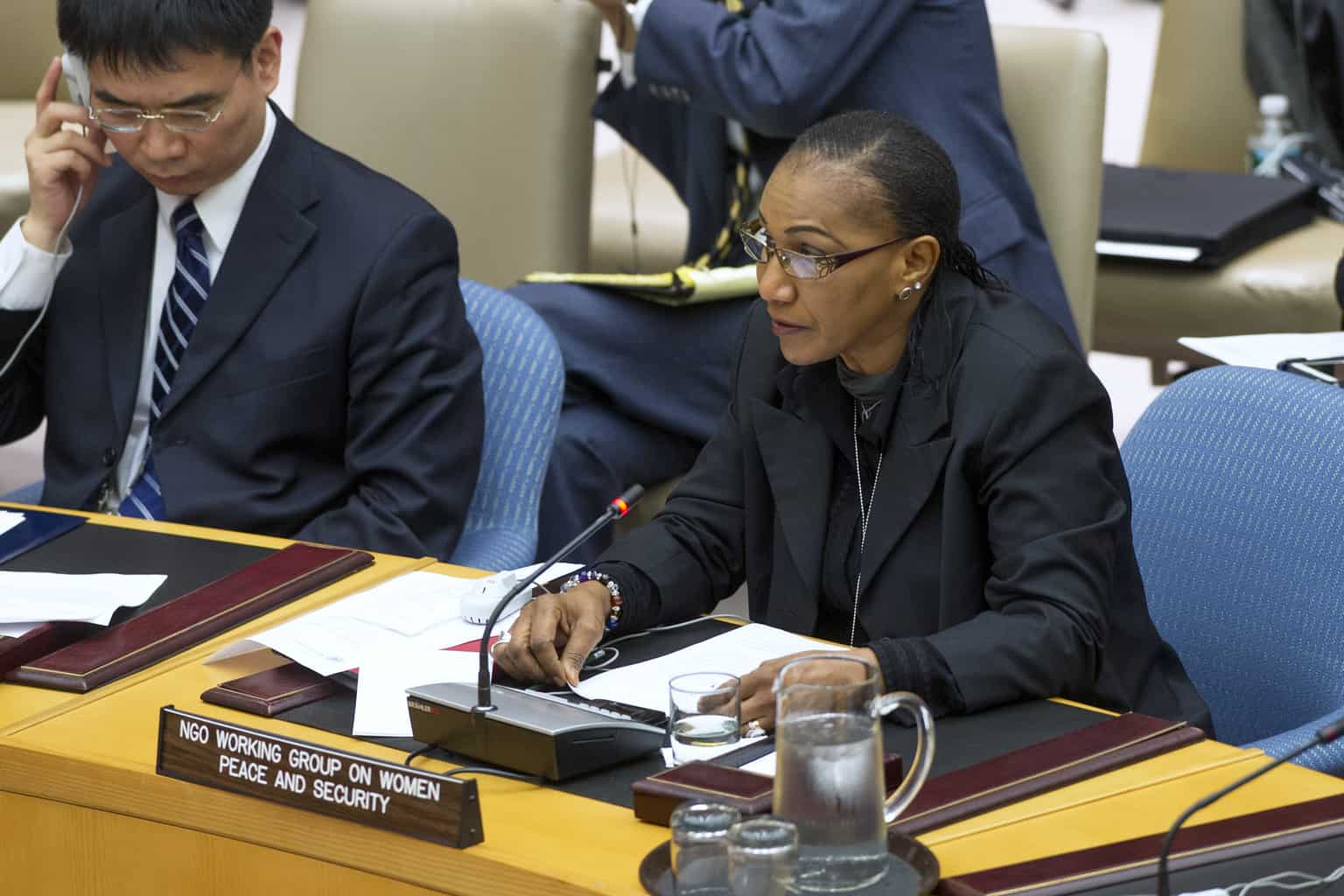 This statement was made by Saran Keita Diakite, President of the Réseau Paix et Sécurité des Femmes de l’Espace CEDEAO /MALI, at the UN Security Council Open Debate on Women, Peace and Security on 17 April 2013. It calls for urgent and effective leadership in addressing the complexities of conflict-related sexual violence and highlights several key areas where progress in terms of women’s participation is essential.

Thank you for the opportunity to address the Security Council. I speak today on behalf of the NGO Working Group on Women, Peace and Security. I am also here in my capacity as the President of the Réseau Paix et Sécurité des Femmes de l’Espace CEDEAO /MALI.

We at the NGOWG appreciate the ongoing work by numerous actors to combat violence against women, including the efforts of the Special Representative of the Secretary-General on Sexual Violence in Conflict. We also welcome the analysis and recommendations in the latest Secretary-General’s Report on conflict-related sexual violence, including recommendations that emphasize the ongoing necessity for disarmament, demobilization and reintegration and security sector reform programs that are explicitly gender-responsive. This report highlights the urgency of addressing sexual violence in conflict in such situations as Afghanistan, Central African Republic, Colombia, the Democratic Republic of Congo, Cote d’Ivoire, South Sudan, and Syria. The report also highlights the devastating impact of sexual violence in the conflict in my own country, Mali.

Effectively addressing the complexities of conflict-related sexual violence requires powerful and urgent leadership at all levels – local, national, regional, and international. Commitment and action – in times of conflict, post-conflict and of peace – are essential. Today, I will address several key areas where progress is essential, namely women’s participation and equality; prevention; response; accountability; and resourcing.

Sexual violence in conflict brutally reinforces the concept that women are not equal – that women can be violated with impunity. Sustainable peace and the elimination of conflict-related sexual violence will not be possible without addressing the root causes of inequality. Concretely, this means ensuring women’s equality at all stages of peace processes and addressing crimes against women in all peace accords, including guaranteeing women’s human rights in the content of peace agreements, ensuring sexual violence is a violation of ceasefire agreements, and not allowing amnesty provisions for such crimes. Powerful action is necessary on these issues, including ensuring peace-agreements that lack women’s participation and inclusion are not be acceptable to the international community, and that political processes are simultaneously responsive to women’s human rights and equally inclusive of women representatives.

Prevention of conflict/ of SViC

There is a devastating link between the flow of arms and the perpetration of sexual violence.

The prevention of sexual violence – and of the underlying causes of conflict itself – is the most powerful instrument available to us. As this latest Secretary-General’s Report demonstrates, and as I have seen in Mali in recent months, there is a devastating link between the flow of arms and the perpetration of sexual violence. Members of the NGO Working Group, including, WILPF, IANSA, GAPW, Amnesty International, advocated for a gender-sensitive Arms Trade Treaty not because women are vulnerable, but because we are targeted. It is now up to all Member States to recognize how the availability of these arms impacts gender-based violence and women’s participation in social and political life. We call on States to uphold their commitments regarding women, peace and security in all disarmament processes.

Response to Victims and Survivors

When sexual violence is perpetrated, the response to victims and survivors is crucial. Survivors and their families have a right to sufficiently funded medical, psychological, and legal support and rehabilitation programs. In addition, without such services, women’s physical and mental health may be irreparably damaged, and impunity too often remains the norm. In Mali, the 2012 coup d’état in Bamako meant that many service providers left the country, leaving survivors without access to vital medical and psychosocial services. With the support of UN Women, my organization, Association des Juristes Maliennes, and others were able to partially fill that gap. This political crisis highlights just how precarious the situation remains for survivors and service providers. In addition, with services mainly concentrated in Bamako, during the conflict in the North many women had no access to services.

Comprehensive services – from medical to psychosocial to legal – must be available, safe, and easily accessible. Medical care for survivors must be of the highest quality possible, and provided in accordance with international humanitarian law and WHO guidelines, giving women and girls the right to non- discriminatory medical care, including the right to terminate a pregnancy resulting from rape.

Survivors of sexual violence must not be blamed and victimized when they seek services and justice.

Unfortunately, impunity remains the overwhelming norm for perpetrators of sexual violence. In the context of conflict, reform of security and justice sectors must guarantee that sexual violence crimes are effectively addressed and responded to. All avenues to justice, including referrals to the International Criminal Court should be pursued. Reparations, as referenced in the Secretary-General’s Report, can constitute an important form of transitional justice for all survivors of sexual violence, especially women and girls, and an important tool for redress and acknowledgment of previous harm. These efforts must include actions to combat the stigma that accompanies crimes of sexual violence. In Mali, for example, we need a collective recognition of the crimes of sexual violence that have been committed during the conflict. In the absence of this recognition, women who attempt to seek justice often have great difficulty accessing courts, and many of whom are themselves reportedly accused of being prostitutes. Survivors of sexual violence must not be blamed and victimized when they seek services and justice.

Resourcing the work of women-led organizations

Civil society plays a vital role in combatting sexual violence in conflict. Sufficient resources must be devoted to women-led civil-society organizations, particularly those providing services to survivors, and those that enable women to access justice and participate in decision-making. Because of the nature of their work, women’s human rights defenders continue to face attacks and threats in many parts of the world. Member States must take immediate steps to ensure women’s human rights defenders are supported and protected, and that the risks they face are recognized and effectively addressed. By doing so, UN Member States – particularly those on the Security Council – can ensure that the voices of those affected by sexual violence are heard, and that their situation is improved.

When conflict and violence came to Mali, we women were mobilized for peace, but did not have the access or the training to make our voices heard. With the assistance of international partners including UN women, 80 women from Mali were trained in mediation, negotiation, and mobilization, vital skills in ensuring women at risk can be heard.

Madam President, UN Secretary-General, Excellencies, Ladies and Gentlemen, I have discussed here today several examples from my country Mali, but unfortunately there are too many similar examples from too many other countries. In all of them, we know the work we must do together – to prevent, to respond, to ensure accountability, and to ensure women have the opportunity to achieve our full potential. While we have come far in identifying the scourge of sexual violence in conflict, we look forward to the day when the commitments that so many in this room have made come to true fruition. Thank you.