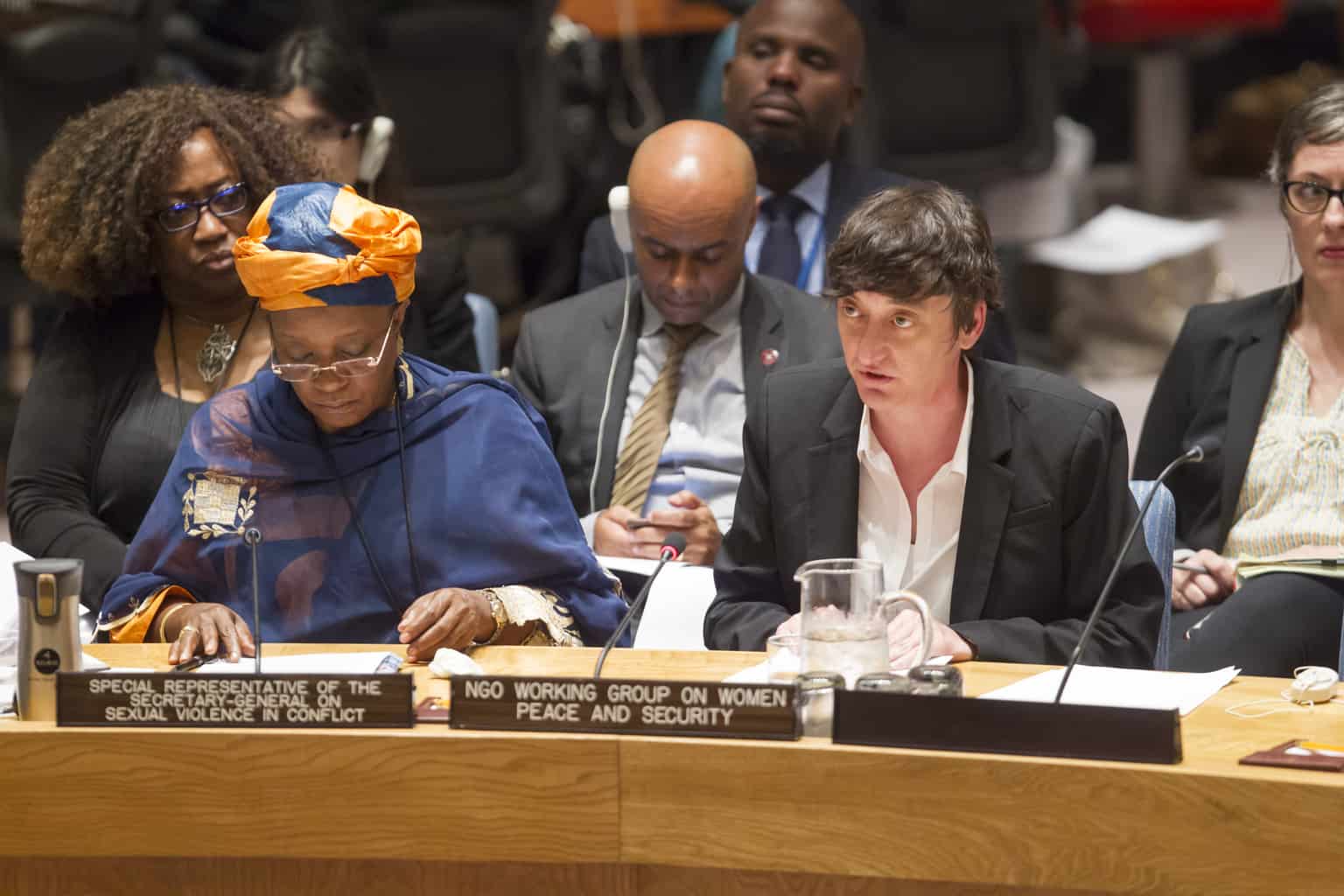 Ms. Lisa Davis, the Human Rights Advocacy Director for MADRE, delivered a statement on behalf of the NGO Working Group on Women, Peace and Security at the UN Security Council Open Debate on Sexual Violence in Conflict on 2 June 2016.

The focus of the debate was responding to human trafficking in situations of conflict-related sexual violence. Ms. Davis’ statement focuses on sexual violence in conflict in the context of violent extremism, including humanitarian response, threats against women human rights defenders, justice and prevention. Original delivered in English.

I speak today on behalf of the NGO Working Group on Women, Peace and Security*, as well as in my capacity as the Human Rights Advocacy Director for MADRE, a Working Group member.

Sexual violence and other gender-based crimes are a constant threat for many local women’s organizations, and activists working on the front lines of conflict, while survivors of this violence face immense obstacles accessing life-saving services. Impunity for these crimes remains the norm. All the while, women are excluded from peace and reconciliation processes, and from the design of policies to counter terrorism, and prevent violent extremism.

While sexual and gender-based violence is prevalent across conflicts today, it is not a new phenomenon. It is part of broader structural violence, that is rooted in attacks on gender equality and women’s rights and freedoms.

These oppressive gender narratives perpetuate multiple forms of violence. From Colombia, to Syria, to Myanmar, many NGO Working Group members have seen, how conflict paves the way for a wide range of abuses against women and girls.

Today, as the Security Council focuses on violent extremism, we will highlight a number of areas that need urgent attention.

The first is humanitarian response,

Women and girls face daily threats from both combatants and non-combatants, including rape, trafficking, and other rights violations as they flee conflict-related violence. They are at risk in displacements camps, and when leaving camps to conduct essential livelihood activities. In many of these settings, gender-based violence is also perpetrated by intimate partners, family members, and civilians including humanitarian aid staff.

Refugee women and girls are often unable to access basic services, including the full range of sexual and reproductive health care, psychosocial support, and access to justice. The protection risks that women and girls face in humanitarian crises are compounded by the shame and stigma that accompany sexual violence. We urge donors to fund comprehensive and non-discriminatory sexual and reproductive health care, including access to safe abortion services, in humanitarian settings and in line with international humanitarian law.

Member states should take action on the recent commitments made at the World Humanitarian Summit, and take practical steps to support new financing mechanisms for women and girls as leaders and decision-makers; to reduce vulnerability including to trafficking; to ensure access to sexual and reproductive health care in crisis settings; and to end impunity.

All governments, including those on the Security Council, must condemn the increased crackdowns on women human rights defenders and women’s organizations. All national security strategies, including those relating to preventing and combating violent extremism, should be grounded in a human rights framework and adhere to international humanitarian law.

As members of the NGO Working Group have reported in numerous countries, speaking out about conflict-related sexual violence is extremely dangerous, especially in cases where state actors are implicated as perpetrators. Local activists who speak up about rape by security forces often face imprisonment, threats of rape, and deliberate efforts to tar their reputation.

Yet impunity often reigns for these crimes. Under the guise of countering violent extremism, governments around the world are invoking national security concerns to justify the systematic harassment, arrest and detention of women activists and service providers. This securitized and militarized framework also contributes to the shrinking of civil society space.

Efforts by the international community to address the threats of violent extremism cannot succeed while women’s human rights defenders are under threat. As our colleagues engaging in the dangerous work of defending women’s rights know, the bitter irony is that policy makers often speak to the importance of this work, while doing little to support it in practice. From Syria to Afghanistan to Burundi to DRC, our brave colleagues continue to work in conflict zones, facing death threats, and sometimes paying the ultimate price for their work.

Documentation of combatant violence committed against all marginalized persons must be supported. For example, in Iraq and Syria local and international groups are documenting human rights abuses committed against women, lesbian, gay, bisexual, transgender, intersex (LGBTI) persons, and other minorities who defy gender stereotypes. These issues were raised last year, when the Security Council held the first-ever Arria Formula to address LGBTI rights.

When such violations in conflict are not exposed, history teaches that they are often left out of the human rights discourse and transitional justice processes. The Council should support these documentation efforts and ensure that crimes committed against all marginalized persons in conflict are accounted for in tribunals and other transitional justice processes.

The international community has a range of options to support access to justice at the local, national, and international levels. The recent landmark conviction of former Chadian President Hissène Habré is a reminder that while the wheels of justice turn slowly, they do turn, and it is possible to achieve accountability for crimes that include rape and sexual slavery. The Security Council and member states should expand political and financial support to accountability efforts, including through referrals to the International Criminal Court, and ensuring those with arrest warrants face trial in The Hague.

The UN Security Council must dramatically improve its daily implementation of women, peace and security. It must better link protection efforts with women’s participation and rights, and call on mission staff to hold regular consultations with women’s local civil society organizations, and with women and girls in displacement settings.

Addressing and preventing sexual violence in conflict also requires taking steps to improve peacekeeping and prevent sexual exploitation and abuse, including through better vetting and accountability measures for peacekeepers. Moreover, the Security Council should ensure adequate protection mechanisms for the courageous whistleblowers who bring these crimes forward.

The Security Council must ensure that it prioritizes and promotes women’s rights and participation throughout its work. The Council has made numerous commitments to these necessary steps, including in recent resolutions. It is time to implement these existing commitments. While formal peace negotiations must be transparent and inclusive of local women peacemakers, their work must also be supported in the long term. Peace talks must not merely tick the gender representation box, but instead meaningfully and holistically include women and civil society.

We cannot emphasize enough the urgent need to curb the flow of guns and other weapons, which exacerbate levels of sexual and gender-based violence. The Security Council must confront this issue, including by encouraging states to ratify the Arms Trade Treaty and establish enforceable national and regional regulations on small arms, consistent with CEDAW General Recommendation No. 30. Prevention efforts must also address the role of both governmental and non-governmental actors in facilitating trafficking, including the role of military bases as trafficking hubs.

The horrific sexual violence perpetrated by state actors, militias, and extremists does not take place in a vacuum. This is part of a continuum of violence across societies, in which women’s rights are degraded and gender inequality is the norm. Armed conflict magnifies these problems. Comprehensively addressing the rights and humanitarian needs of women and girls fleeing conflict requires addressing these pre-existing inequalities. This contextual analysis sheds light on sustainable solutions to long-standing human rights violations that are exacerbated by conflict. As we face multiple crises and conflicts today, this approach to social change will help us as an international community weave solutions out of uncertainty and build more equitable foundations for the future.

Mapping Women, Peace and Security in the UN Security Council: 2019