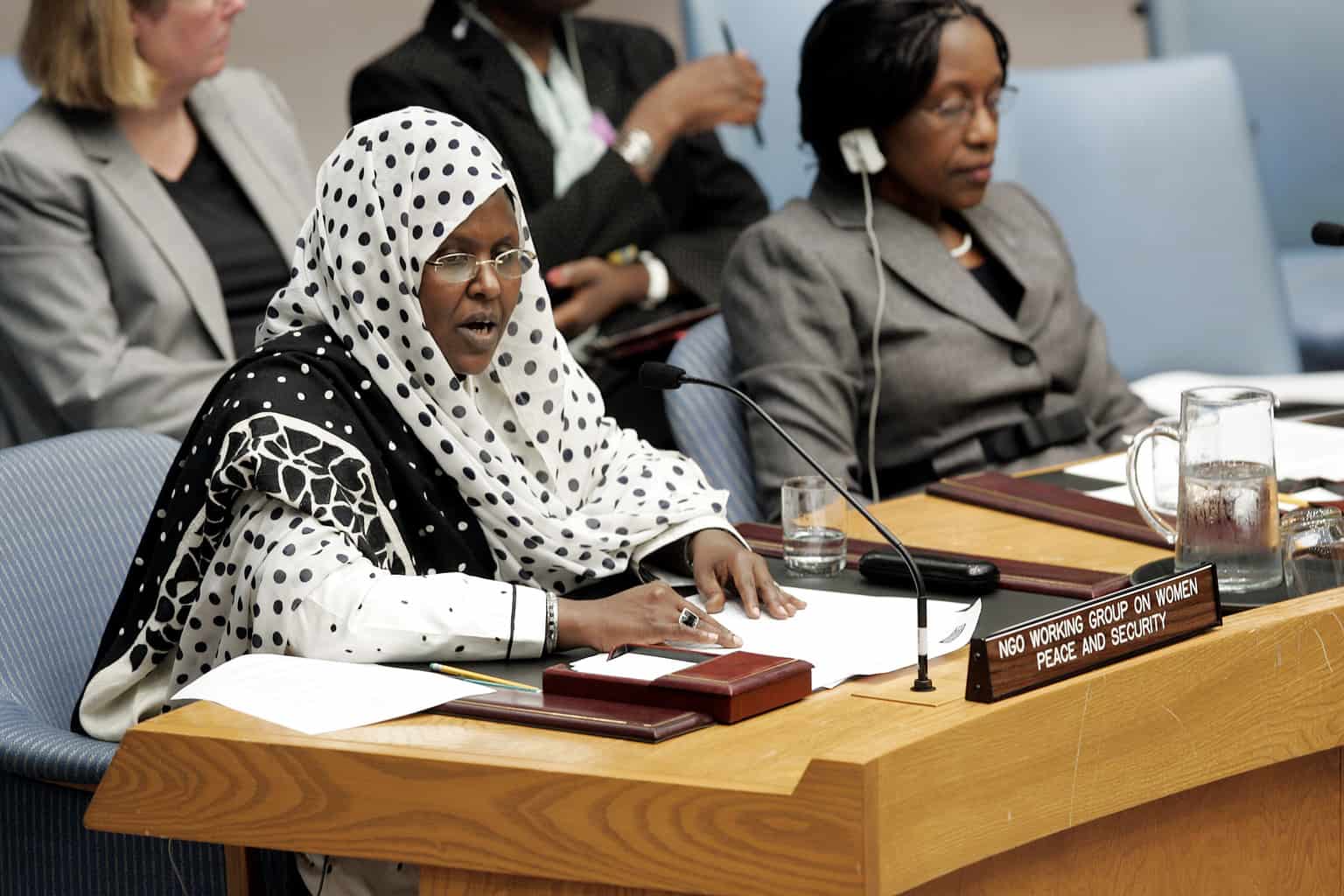 Statement made by Ms. Asha Hagi Elmi Amin on behalf of the NGOWG at the Security Council Open Debate on Women, Peace and Security. During the debate, the Council unanimously adopted resolution 1889 (2009), reaffirming its landmark 2000 resolution 1325, condemning continuing sexual violence against women in conflict and post-conflict situations, and calling for measures to strengthen the participation of women at all stages of peace processes.

I would like to thank the Security Council for the invitation to speak here today. I am speaking on behalf of the NGO Working Group on Women, Peace and Security, a coalition of international civil society organizations that advocates for the equal and full participation of women in all efforts to maintain international peace and security. I am here today in my capacity as an advocate for the political, economic and social rights of women in Somalia. In 2000, my colleagues and I formed the “Sixth Clan” to carve out Somali women’s space in the male-dominated political world. Through this Sixth Clan identity, for the first time Somali women participated as equal partners and decisionmakers in the peace process, and we ensured quotas for women in the parliament. This was the first time that women were represented in a peace process in Somalia, and I was the first woman to sign the agreements. The peace and reconciliation process in which we participated was the first to be successful after numerous previous attempts.

However, without accountability for in these resolutions, persistent impediments to their implementation will remain. Your support is needed in ensuring the strong, high-level leadership, the coherent and systematic approach towards implementation, and the concrete monitoring mechanism to address gaps in the system that these resolutions necessitate.

Women remain at the margins of peace-talks – to the detriment of society as a whole.

As the Security Council rightly noted 9 years ago in resolution 1325, women’s meaningful participation in all levels of decision-making is integral to conflict transformation; to post-conflict stability; and to post-conflict re-building. The Council has reinforced this sentiment in its subsequent resolutions on women, peace and security, as well as in many country-specific resolutions—but without providing an accountability structure for implementation. As a result, women remain at the margins of peace-talks – to the detriment of society as a whole.

As I know from my experience in Somalia, women have the potential to add immense value to peace processes and negotiations. The women I worked with brought tolerance, compassion, forgiveness, and practical solutions that are the basic tenets of reconciliation. In the Somali process, women often represented and spoke for the silent majority; for the unarmed civilians, who are mainly women and children. That silent majority needs the voice that these women brought to the table.

We know that women’s contribution the peace process is vital and worthy. Women speak not only about so-called “women’s issues,” but, as we can see from the practical lessons learned in Somalia, women can speak at the highest level on key political, social and economic issues relevant to sustainable peace, such as clean water and health.

Women’s participation in peace processes is not optional: it is a requirement. However, it is not only the job of women to bring these voices and issues into all conflict resolution and rebuilding efforts. Men must also ensure that women’s rights and interests are meaningfully addressed in all peace processes, and included in peace agreements and conflict transformation planning, such as security sector and judicial reform, service provision, in addressing impunity, and in the truth and reconciliation process.

Women’s participation in peace processes is not optional: it is a requirement.

Twelve months from now, the international community will again turn its focus on resolution 1325 to commemorate the 10th Anniversary of the its adoption by the Security Council. We now look to you, the international community, to live up to your obligations to women in conflict by ensuring that women are engaged in all levels of decision-making in conflict resolution processes; that the rights and interests of women are addressed in these processes; and by demonstrating marked improvement in the number of women in any peacebuilding and civilian peacekeeping support your Government provides.

Your concrete support for accountability, leadership, and resourcing is essential. Over the next 12 months, we urge each of you to support key developments within the UN system: by ensuring that the new consolidated UN gender entity for women and its Under Secretary-General is well-resourced; and by supporting the Secretary-General’s appointment of the Special Representative on women, peace and security; and by ensuring gender expertise is further mainstreamed in UN entities like the Department of Political Affairs.

Finally, I thank you for this opportunity to address the Council today. We women are not only victims in conflict, but agents for positive change. Women have shown courage, commitment, and determination in these situations. We have been positive contributors to peace processes. We often risk our lives to take these actions.

What women still lack is coherent and practical support from the international community. Women need this support to secure their places in decision-making positions; to help end these conflicts; and to rebuild the country to ensure sustainable peace after these conflicts have devastated our communities.

We look forward to all of you – here in this room, and in the broader international community – providing that concrete support. Without your support to women in conflict, we put at risk our dreams of a safer world, and of ensuring true international peace and security.