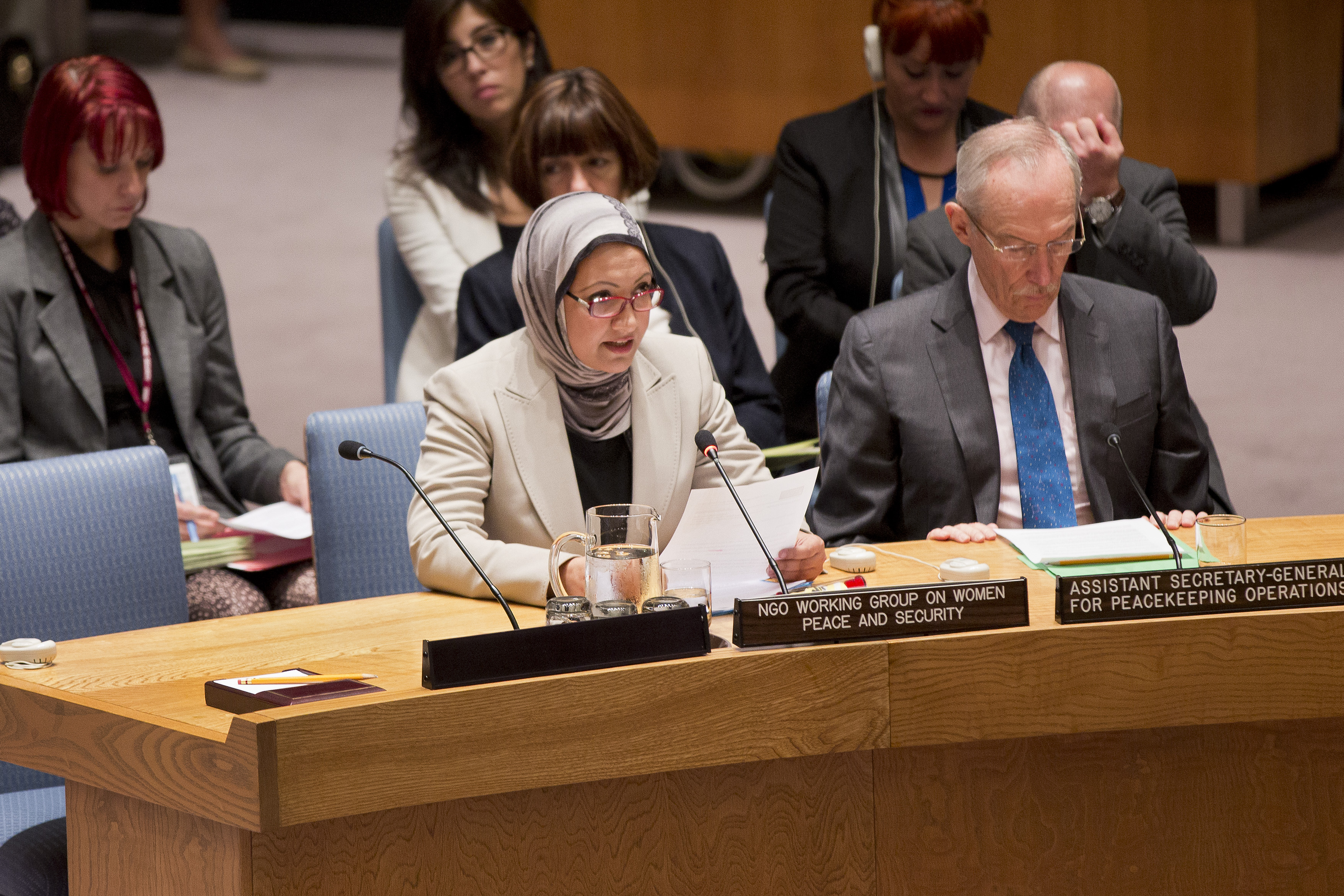 This statement was made by Ms. Suaad Allami Founder and Director, Sadr City Women’s Center and Legal Clinic, on behalf of the NGO Working Group on Women, Peace and Security at the United Nations Security Council Open Debate on “Women and peace and security”.

I am here for my friends and colleagues, Samira Salih al Nuaimi and Umaima al Jebara, who were recently killed defending women’s rights in Iraq; Razan Zaitouneh who was abducted for documenting human rights violations in Syria; and all activists who risk their lives daily to make women, peace and security not just a resolution, but a reality.

Concrete steps are needed to implement the entire women, peace and security agenda in all settings. I speak on behalf of the NGO Working Group on Women, Peace and Security,[1] and in my capacity as Founder and Director of the Women for Progress Center in Iraq.

Displacement is a cause and consequence of conflict. I see it in my daily work how displaced women and girls are affected when they are forced to flee. Many are traumatized from the violence.

Imagine fleeing because your daughter is at risk of being kidnapped, forced to marry a militant fighter or trafficked into sexual slavery. Today must be about women and girls and responding to their rights and needs, promoting their leadership and voice.

We, in civil society, echo their voices in reporting to the Security Council that we have seen no significant change in the areas that would have the biggest impact. This includes in the efforts of the UN and Member States to: end gender inequality; stop supplying arms that exacerbate the damage caused in wars; insist on women’s inclusion in negotiations; consult with women; and support and invest in women’s human rights and civil society.

I want to address three key inter-connected ways to overcome this inaction: first, the importance of women’s leadership and participation; second, the need for gender-sensitive and multi-sectoral responses to protection efforts and humanitarian assistance; and third, women’s role in conflict prevention and in combating state and non-state violence including violent extremism and terrorism.

First, women must fully participate and be consulted systematically in decision-making, across all displacement settings, in humanitarian programming, and, of course, in the broader political, security and peace processes. Supporting women’s civil society and human rights defenders is key – both politically and financially. National governments, international actors and donors must invest in community led long-term solutions and provide assistance and training to a diverse range of grassroots civil society organizations.

Second, it is vital that protection efforts and humanitarian assistance is gender-sensitive and multi-sectoral in accordance with international law. Women and girls, including those displaced, must have access to livelihood opportunities, the full range of health including sexual and reproductive health care services, and education to give them greater control over their lives. Much attention is being placed on providing immediate humanitarian assistance to internally displaced people in Iraq, however there are gaps in addressing the long-term impact on them.

Recently, two young Yazidi women were rescued when they were bought from ISIS fighters. They had been passed from one group of fighters to another across the country and repeatedly raped. They were returned to their community where they have no access to health or psycho-social services. Local religious leaders assured them they would not be further harmed but no emphasis is being made on addressing their long-term trauma or stigma.

Using a survivor centered approach, we must also build the capacity of law enforcement agencies to respond to sexual and gender based violence including in displaced settings. Women must be recruited to senior policing roles. All perpetrators, including in South Sudan and Somalia where sexual violence by all sides of the conflict is at horrific levels, must be held to account under national and international human rights and humanitarian law.

Third, conflict prevention lies at the core of the women, peace and security agenda and all solutions must address the root causes of conflict and displacement. This includes addressing disarmament and de-militari-zation, gender inequalities and investing in women’s human rights, equality, economic empowerment, education, and women-led civil society. Militarization and arms proliferation fuel conflict by directly and indirectly killing and impacting civilians. We condemn the use of violence against women, girls and all civilians including in Gaza, Syria and Iraq.

The number and conditions of women IDPs and refugees has been exacerbated by both state and non-state actors. In Iraq and the region, violent extremists are deliberately displacing communities. Women must be supported in their efforts to connect formal and informal justice systems and to engage moderate tribal and religious leaders on women’s rights. Iraq’s National Security Strategy, currently being developed, must fully incorporate the role of women within it and reflect the commitments in its National Action Plan for 1325.

Efforts to combat extremism must address pre-existing threats to women and girls embedded in laws and social norms. The Iraqi government must uphold its duty to ensure that the legal framework protects women and girls, and ensures their full participation. The government must abolish every form of discrimination, in line with international obligations, including passing domestic violence legislation, abolishing and criminalizing child marriage and marriages outside of the court. Iraq must guarantee the independence of its institutions, in particular its Human Rights Commission and ensure they can operate free from political influence. Legal aid for marginalized and vulnerable groups must be funded and institutionalized. This all requires international pressure and domestic political will.

We call on the Security Council and all UN Member States to use a gender lens to address the challenges faced by women who have been forcibly displaced as well as across all peace and security efforts and to recommit to working towards the full implementation of the women, peace and security agenda. Next year marks the fifteenth anniversary of the adoption of Security Council resolution 1325. Let us make 2015 the year for progressive action: for senior political leadership; for strengthened women’s participation and leadership opportunities and once and for all for consistent implementation of all women, peace and security commitments.

All human beings have the right to be safe and live a life in dignity.