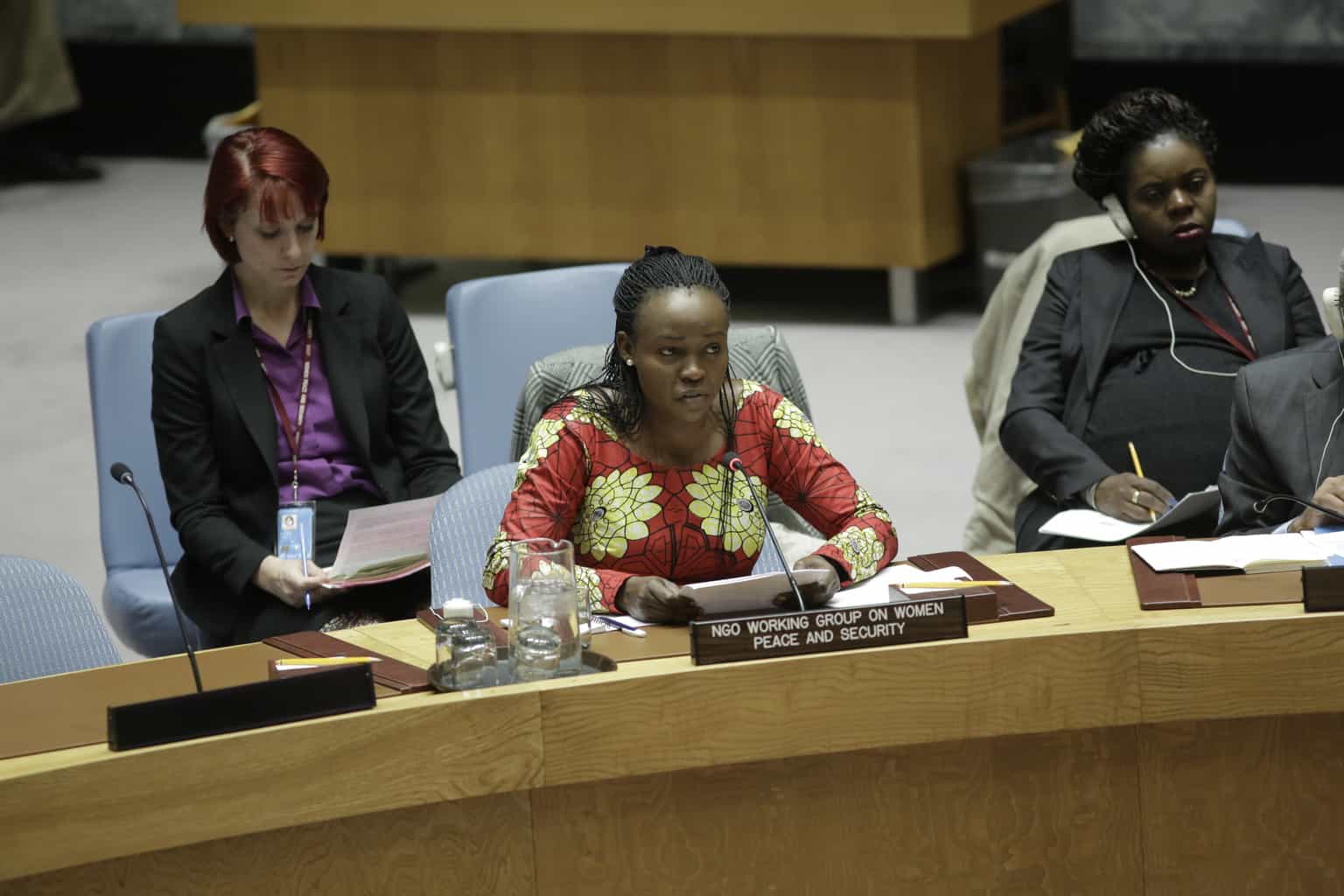 This statement was made by Ms. Rita Lopidia, Executive Director and Co-founder of Eve Organization for Women Development in South Sudan, on behalf of the NGO Working Group on Women, Peace and Security, at the United Nations Security Council Open Debate on “Women and peace and security.” The statement highlights the importance of women’s involvement during all phases of peace agreements; the actions peacekeepers must take to include women in protection strategies and, overall, be more responsive to the needs of women and girls; our right to justice and accountability; and strengthening inclusive institutions and national frameworks.

I speak today in my capacity as Executive Director and Co-founder of Eve Organization for Women Development in South Sudan and on behalf of the NGO Working Group on Women, Peace and Security.

In my country, conflict is spreading, tribal and community tensions are mounting and over 1.6 million South Sudanese are internally displaced. For the majority of women in South Sudan, peace and security remains far-fetched and almost unattainable. Women lack protection, live in fear, are at risk of being raped daily, have almost no recourse to justice, are economically disadvantaged and live with limited freedoms. Yet, we stand united in our search for peace.

In my role as a women’s rights and peace activist, I meet many South Sudanese women, and the stories they share with me are heartbreaking. A woman in Bentiu, Unity State, told me recently, ‘I have been raped several times, but I still have to go out, what option do I have? I still have to find food for my children. On a lucky day, I go out and nothing happens. On a bad day, I go out and I am raped’.

I want to focus today on the critical involvement of women during all phases of peace agreements; the actions peacekeepers must take to include women in protection strategies and, overall, be more responsive to the needs of women and girls; our right to justice and accountability; and strengthening inclusive institutions and national frameworks.

I was part of the civil society delegation in Addis Ababa advocating for women’s issues to be included in the agreement and for women to participate in all parts of the process. It took significant advocacy for women civil society to sit at the negotiating table. The inclusion of women’s issues and the signing of the agreement in August 2015 gave South Sudanese women hope, however its implementation was not guaranteed as is evident from the violence that erupted in July. Peace and stability will not come to South Sudan if the agreement is not implemented.

I have just come from Nairobi where, along with South Sudanese and global partners, I convened a peace dialogue with representatives of the Transitional Government, local and global women’s groups, faith-based organizations and academia. It is important such initiatives fostering people to people dialogue be supported. We came together to call for an end to the violence and for all South Sudanese leaders to rise above tribal affiliations to build a peaceful national identity based on respect, diversity, personal integrity and women’s inclusion. The different parties to the agreement must honor their commitments; denounce violence, including widespread sexual violence; and respect both the letter and spirit of the agreement. The Security Council and the international community must apply all necessary pressure to ensure that the entire agreement is upheld by every side and that South Sudanese women from national and grassroots organizations are included in its implementation and monitoring.

Women peacebuilders and civil society colleagues in Colombia have also asked me today to urge the international community to ensure that the comprehensive agreement reached in Havana is salvaged. I join them in calling for women, including Afro-Colombian and Indigenous women, to continue to be part of all discussions on the future of the agreement.

Across all conflict and crisis situations, the Security Council must also prioritize women and girls’ protection. Peacekeeping missions mandated to protect civilians, including UNMISS, as well as humanitarian agencies, must do a better job of seeking out and listening to the needs of women and prioritizing their protection. A crucial aspect of ensuring that women are protected is increasing the number of women peacekeepers to enable more responsive channels for women to communicate their immediate protection concerns and overall perspectives on the security situation.

Recognizing the urgent situation in my country, the Security Council adopted resolution 2304 (2016) in August this year. The Security Council should not allow 2017 to arrive without the government and opposition leaders of South Sudan meeting all the requirements set out in this new resolution including the deployment of a Regional Protection Force, the improvement of UNMISS peacekeeping operations and the realignment of transitional security arrangements for Juba and other major cities and deadly flash-points. South Sudan is increasingly becoming a living hell for a lot of women and, in my opinion, this should not be happening on your watch.

If the government and opposition leaders of South Sudan do not meet the requirements set out in the latest Security Council resolution, then the Security Council must impose more targeted sanctions on individuals and a total arms embargo. South Sudan has one of the highest rates of arms per capita of any country worldwide, which is exacerbating the violence in my country. The Security Council’s reluctance to address the ongoing impunity in South Sudan is prolonging this conflict and its devastating impact on women.

Additionally transitional justice, accountability and reconciliation are important parts of healing, for South Sudanese women and for women elsewhere. The Security Council, African Union and Member States need to support the rule of law, including the establishment of the Hybrid Court for South Sudan and the appointment of women in senior roles throughout the court. You must also not allow impunity to fuel further violence and atrocities. Accountability must extend to sexual exploitation and abuse committed by all UN and international staff.

The situation in my country has today reached a dangerous tipping point. There is an urgent need for good governance, respect for civil society, institutional reforms and respect for women’s quotas in power sharing. South Sudan recently launched its first National Action Plan on Security Council resolution 1325 (2000), however there seems to be little or no political will to translate it to realities on the ground and so women continue to be systematically excluded from decision-making.

Women’s voices not only in South Sudan but also from Syria, Iraq, Yemen, Mali, Central African Republic, Democratic Republic of Congo and other conflict affected areas around the world must be elevated. The Security Council, the UN and Member States must significantly improve their engagement with women civil society during times of crisis at headquarters in New York and in missions, including those undertaken by Security Council members. Despite a commitment made this time last year, the Security Council has yet to invite civil society representatives to country specific consultations.

Many other commitments were made last year during the High Level Review on Security Council resolution 1325 (2000) on promoting women’s participation and gender equality, emphasizing conflict prevention, and financing the women, peace and security agenda. Unmet commitments are just words and do nothing to bring about peace. I look forward to hearing the concrete actions that have been taken in the last twelve months to improve the lives of South Sudanese women and of other women around the world affected by conflict and to promote their inclusion in all decision making.