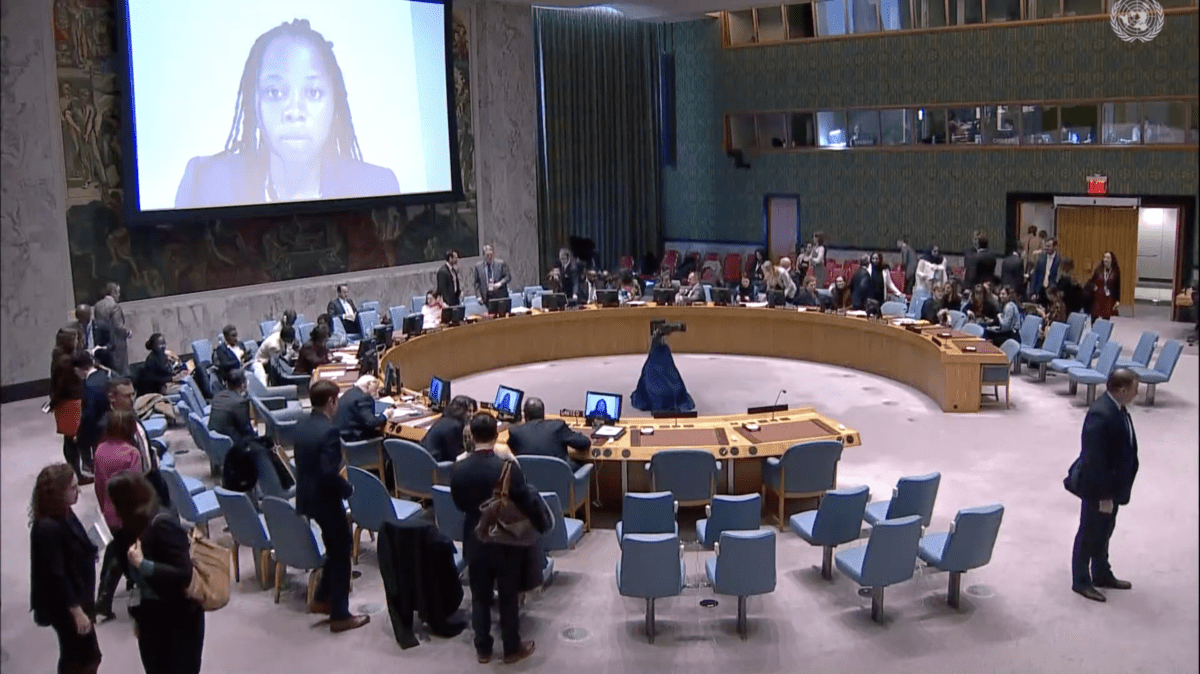 Rebecca Kabuo, activist with Lutte pour le Changement (LUCHA), was invited to provide a civil society perspective and recommendations when the Security Council met to discuss the situation in the Democratic Republic of the Congo.

Thank you for giving me the opportunity to share today some concerns and recommendations about my country, the Democratic Republic of the Congo (DRC).

My name is Rebecca Kabuo. I am a member of the Lutte pour le Changement (LUCHA). LUCHA is a non-partisan and non-violent Congolese citizen movement that was launched in 2012 in Goma, to call for respect for democracy and fundamental human rights in the DRC.

Protection of civilians, including women and girls

The resumption of fighting between the Armed Forces of the Democratic Republic of the Congo (FARDC) and the M23 Movement has exacerbated tensions in the region, as well as the humanitarian and human rights crisis in the country. As the region strives to find peaceful solutions to the conflicts, Rwanda has continued to provide military support to the M23 Movement.

M23 rebels killed 131 civilians (102 men, 17 women, and 12 children) in reprisal attacks on civilians on 29 and 30 November in Kishishe and Bambo, two villages in Rutshuru territory in North Kivu province. At least 22 women and five girls were raped.

In addition, the presence of East African Community troops has created great concern among a population already under constant threat of violence and abuse of their human rights. Civilians are forced to pay “taxes” to armed groups to stay in their homes safely, and those who cannot pay have no choice but to flee or to risk violence. This situation has increased the economic vulnerability of women living in the context of conflict.

It is well known that the conflict has had a profoundly negative impact on women and girls. Gender-based violence increased by 80% in 2021, yet access to justice remains elusive and perpetrators are rarely punished. Even the UN Security Council, which has the ability to set an example for the rest of the world through its sanctions regime, has not listed any new individuals or groups since 2020. More than one million people have been displaced, a considerable proportion of whom are women and girls. Women are not only at heightened risk of sexual and gender-based violence, but also of diseases such as cholera.

Women human rights defenders continue to be targeted by the authorities, and are subject to death threats, arbitrary arrests, abductions, sexual and gender-based violence, office raids, and stigmatization, all against the backdrop of a culture of impunity for human rights violations. It is essential to monitor and report on attacks against women human rights defenders and peacebuilders, especially as existing protection mechanisms have proven ineffective and devoid of gender.

Unfortunately, there have been no consultations with civil society on the electoral calendar. With elections now scheduled for December 2023, it is critical to reflect on the current political participation of women and youth in the DRC, as well as their civic space to express themselves.

Women still face significant barriers to accessing polling stations, particularly in remote rural areas. When they can access a voting booth, women have to combat pushback stemming from gender stereotypes, as well as practical obstacles, such as lack of information about voting procedures. Women candidates face lack of information, lack of funding and gender-based violence.

The Independent National Electoral Commission (CENI) recently announced an electoral calendar that provides for only 30 days for voter registration. Such a short time frame is an additional obstacle to the full participation of not only women, but also internally displaced people and people with disabilities, especially in conflict areas.

At the Nairobi peace talks in April 2022, there were no women among the 30 delegates from armed groups in the DRC. While the most recent talks in Nairobi in November included women civil society, women leaders continue to express concern that the DRC government and MONUSCO must ensure that they are fully and meaningfully included in all current and future negotiations, given the active and essential role women have played in local peace efforts.

The role of MONUSCO

Public resentment of MONUSCO has grown. Our people are frustrated that MONUSCO has been in the DRC for more than 20 years but has not been able to end the cycle of violence or provide adequate protection or security for civilians, as per its mandate. Moreover, the death of at least 12 civilians during anti-MONUSCO demonstrations in July has further increased mistrust.

A clear and well-communicated MONUSCO transition plan with important gender elements is crucial for a sustainable solution to this conflict. The expected revision of this plan must meet the standard set by the current plan for the inclusion of gender, and go beyond by clearly articulating the way in which the perspectives of women civil society will inform assessments of progress.

We therefore call on the Security Council to:

Today, more than ever, the Congolese people are facing challenges that seem insurmountable. But it is at times like these that we must not despair. As representatives of civil society, we have not lost hope that peace will prevail in this country. However, we will only succeed if the international community — including you, the Security Council — supports us in these efforts.