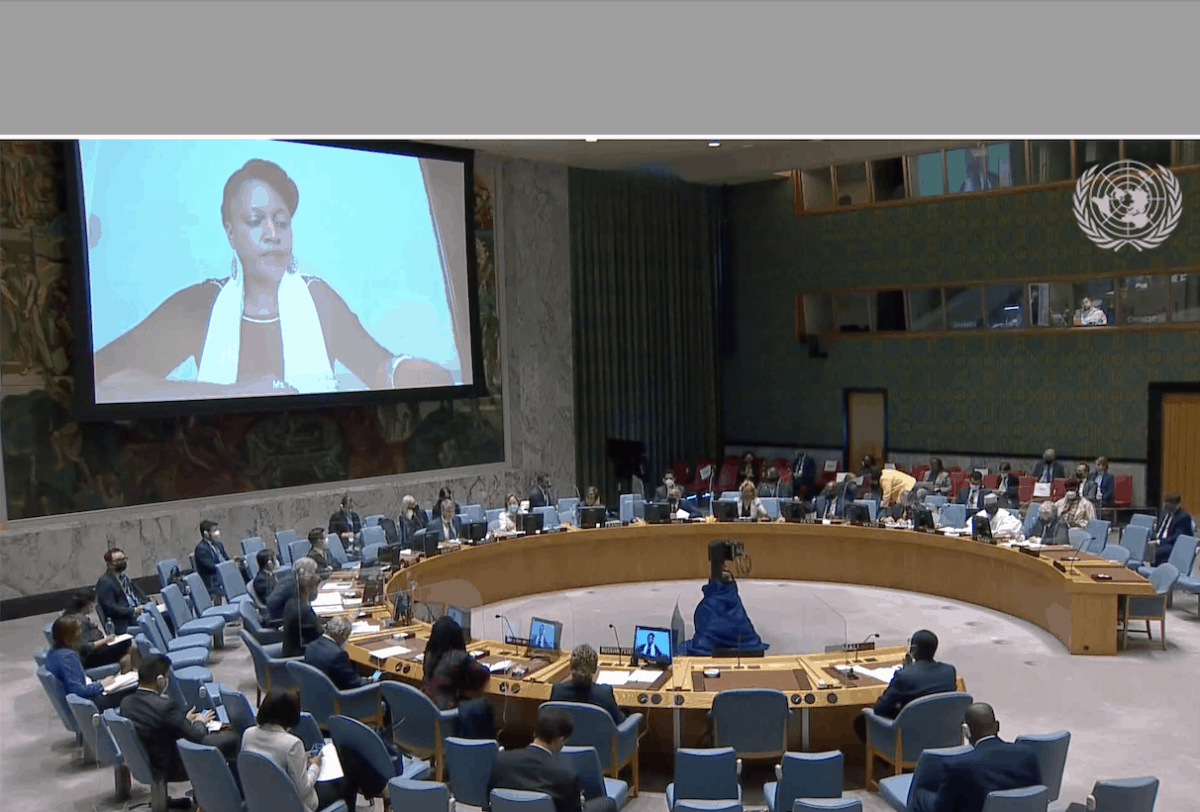 I would like to begin by thanking you, Mr. President, for giving me this opportunity to brief the Security Council on the situation in Mali and the Women, Peace and Security (WPS) agenda. I am Fatima Maiga, president of a coalition of women from the signatory groups of the Peace Agreement and director of the consulting firm ESEN, which has notably piloted the process of integrating women into the Monitoring Committee of the Agreement for Peace and Reconciliation (APR) in Mali on behalf of the Norwegian Embassy.

Excellencies, Members of the Security Council,

The realization of the WPS agenda in Mali remains dependent on strong political will and relative political and institutional stability.  Unfortunately, the fifth post-coup transition in Mali in sixty years of independence, two of which have taken place under the current MINUSMA mandate, shows us the long way to go to stabilize Mali, in accordance with the Mission’s primary objectives. It also shows that without a more significant treatment of the root causes of the multifaceted crisis that has shaken the country since 2012, the vicious circle of instability will continue: these include the issues of inclusive and equitable governance of land and productive resources and access to justice.

Ladies and gentlemen, my speech will focus on two points with recommendations:

Regarding Point 1: The 2020-2021 mandate of MINUSMA has been marked by a strong trend of closing the space for women’s rights in Mali, despite notable progress. As part of this progress, nine women from the signatory parties are now members of the Monitoring Committee (CSA in French) of the APR for the first time in six years.[1] Norway is to be congratulated for its pivotal role in achieving this result.

However, the overall situation of women’s rights in Mali remains critical:

Regarding point 2: The Security Council and MINUSMA have a key role to play in putting the issue of gender and the implementation of resolution 1325 (2000) back at the heart of the transition’s priorities; indeed, eight of the twelve months of MINUSMA’s new mandate will take place during the new phase of the Transition, which has set as a priority the holding of free and credible elections by February 2022, as well as ensuring the security, stabilization and protection of people throughout the country. It should be noted that gender issues, in particular the prevention and management of sexual violence and GBV, were not included among the six priorities of the initial roadmap of the Transition. The expected process of adjusting these priorities for the remaining nine months of the transition must therefore be used to try to strengthen their inclusive nature both from the point of view of stakeholders and of geographical and thematic coverage. This can only be done if there is a real break with the ‘wait-and-see’ attitude that has largely prevailed over the last nine months regarding the WPS agenda, despite being backed by a robust National Action Plan for the implementation of Resolution 1325. In particular, the WPS agenda must move from being just everybody’s business to being a clearly defined responsibility submitted to the assessment of certain key stakeholders. Therefore, it is recommended that the Security Council:

Mr. President and Excellencies members of the Security Council, it goes without saying that the people of Mali are in desperate need of peace and prosperity after nearly a decade of violent conflict and recurrent instability. These aspirations will only become a reality if women’s rights are protected and they are truly involved in building a lasting peace. I appeal to you, the members of the Security Council, for your support.