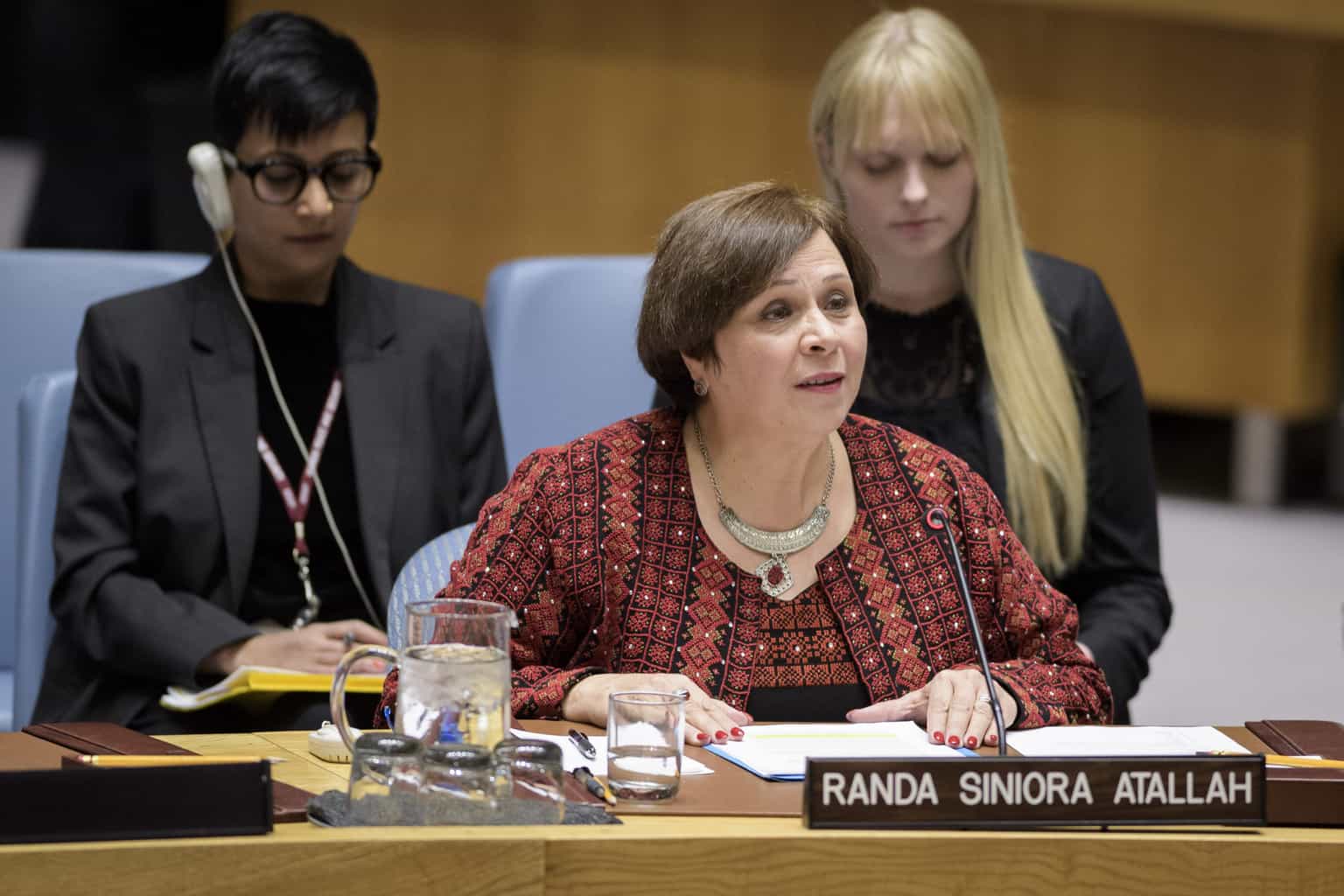 This statement was made by Ms. Randa Siniora, General Director of the Women’s Center for Legal Aid and Counseling (WCLAC) on behalf of the NGO Working Group on Women, Peace and Security at the United Nations Security Council Open Debate on “Women and peace and security.” The statement highlights the gendered impact of the Israeli occupation of Palestine, specifically the disproportionate economic, social and political effects on women and girls living in the Occupied Palestinian Territories.

Good morning. Today, I speak in my capacity as the General Director of the Women’s Centre for Legal Aid and Counselling (WCLAC). I also speak on behalf of the NGO Working Group on Women, Peace and Security. I speak to you as a peace leader and as a human rights defender who has witnessed, documented, and spoken out about violations in the Occupied Palestinian Territory for three decades.

Today I bring to you the voices of Palestinian women, who still face violence, discrimination, deprivation and systematic violations of their human rights on a daily basis.

Mervat, a resident of the old city of Hebron, stepped out of her home one day to take out the garbage, when she was violently attacked by a group of settlers. Neighbors who heard Mervat’s screams witnessed them beating her and raised an alarm. Mervat was four months pregnant at the time and lost her baby as a result of her injuries.

Last September, Sana, living in Jerusalem, awoke to find Israeli police at her front door. A young mother of two, she listened, shocked as they informed her that they were going to demolish her home under the pretext that her family did not have a building permit. They were given one week to move out.

Earlier this May, during the recent marches of return on the eastern border of Gaza, Nisreen, a mother of three, was shot in the chest by the Israeli military. Nisreen had been peacefully demonstrating with a group of women and children. Two days later, Alaa, was shot in the stomach while walking with her friends to watch folk dancers perform near the same border.

These stories illustrate what life under occupation is like for ordinary Palestinian women and girls—they live at risk of violent attacks while going about their daily lives. Their homes can be snatched from them at a moment’s notice. Participation in public life is under a shadow of fear.

The Israeli occupation and the resulting humanitarian crisis are deeply gendered and exacerbate existing gender inequalities—women disproportionately endure the violence of occupation borne by all Palestinians, and often with gender-specific consequences. Palestinian women face attacks, threats, intimidation, discrimination, and restrictions on their movement by the Israeli military on a daily basis. Night raids, destruction of property, and violence at checkpoints are also routinely committed by the occupying forces. Palestinian women lose their homes and cannot reunite with their families due to restrictions or denial of residency permits. They look on as their husbands and children are detained, attacked or killed in front of them. Women often suffer gender-specific torture in Israeli prisons, and the discrimination experienced by refugee women is compounded by displacement.

The occupation reinforces the patriarchal structures of Palestinian society. Women must earn a living on top of their responsibilities to care for the young, sick or injured, often isolating them from their communities and public life. In efforts to protect their families from violence or arrest, women often become prison guards to their own children. Political violence in the public sphere leads to spikes in violence in the private sphere—domestic violence is shockingly high, and femicide is on the increase.

Not only do women suffer these abuses, they are starved of the resources to respond to them. The fragile conditions created by the occupation mean that Palestinian women lack access to justice and the means to live. The recent funding cuts to UNRWA have also disproportionately impacted the lives of Palestinian women, especially in health and education. The destruction of infrastructure has had a devastating impact on families and the lives of women and girls by cutting off their access to food, water, sanitation, electricity and life-saving medical care. As the Special Rapporteur on Violence Against Women noted in 2017, economic deprivation and high levels of unemployment, compounded by the pressure of the occupation, have also made Palestinian women more vulnerable to violence. More resources for Palestinian women would not only make them less prone to violence but are essential to their participation in their communities.

For women, the fear and deprivation accompanying occupation have meant being unable to join public life, or to defend our rights. The Israeli occupation has shrunk the space for a free and independent civil society by banning peaceful demonstrations and persecuting journalists who are critical of the occupation. Women human rights defenders are accused of incitement by Israel. In July of this year, thousands of Palestinian women marched on the eastern borders of the Gaza Strip, in peaceful protest against the occupation. Israeli snipers shot at protestors and teargassed them, injuring thousands and killing almost a hundred civilians.

In addition, civil society volunteers, including medical workers, are targeted by the army despite being clearly identifiable in uniforms. Female journalists reporting on the conflict are assaulted and detained. Retaliation for their work deters them from reporting on the occupation. This serves to further marginalize women’s voices from the public sphere.

In committing to Women, Peace and Security, the Security Council recognized the importance of women’s meaningful participation, and that without women, there can be no peace. The lives of Palestinian women are evidence that these commitments have not been met.

Though women have been at the forefront of the Palestinian liberation movement and the Palestinian Authority worked with grassroots women leaders to create a 1325 National Action Plan, few have been represented in peace talks. Women are under-represented both as official negotiators and as technical advisors, despite clear evidence that they have often been critical to working across political divides, building grassroots support for peace, and providing essential expertise on human rights or issues like health and access to resources. Little space has been made to integrate Palestinian women’s concerns into key political processes, including for achieving Palestinian statehood or for national reconciliation. Representation of women in key decision-making positions, including in Palestinian Authority institutions, is barely 5 percent. Only 4 out of 30 members of the internal reconciliation team are women. Palestinian women have not been consulted in shaping political or humanitarian responses in our country and our needs have therefore been overlooked.

The situation of Palestinian women today has further been compounded by a real and serious crisis of legitimacy and trust in the United Nations. The Security Council was first established to maintain peace and security, not to manage conflict. Its chronic inability to take effective action to end the Israeli occupation, with little hope that this will change, exemplifies this crisis. On the contrary, Member States continue to trade arms with, and offer political support to Israel, while Israel continues to impose policies and practices that are in clear violation of international law.

Israel’s occupation and the prevailing culture of impunity have not only destroyed the lives of Palestinian women and men, they have jeopardized peace and security across the Middle East. The international community can no longer look away from the plight of my people, who have endured the world’s longest occupation. We call on the Security Council to address the root causes of the conflict and to support our right to self-determination. We call for an end to the occupation as a first step toward building peace, and for women to be at the forefront of these efforts.

Therefore, the Security Council must act now to:

Palestinian women who have grown up under the occupation have been on the frontlines defending our lands, our homes, and our families. We continue to lead efforts to demand accountability and advocate for equality. We therefore have not only the right, but also the ability, the expertise, and the experience to forge the path to a sustainable, just and durable peace.