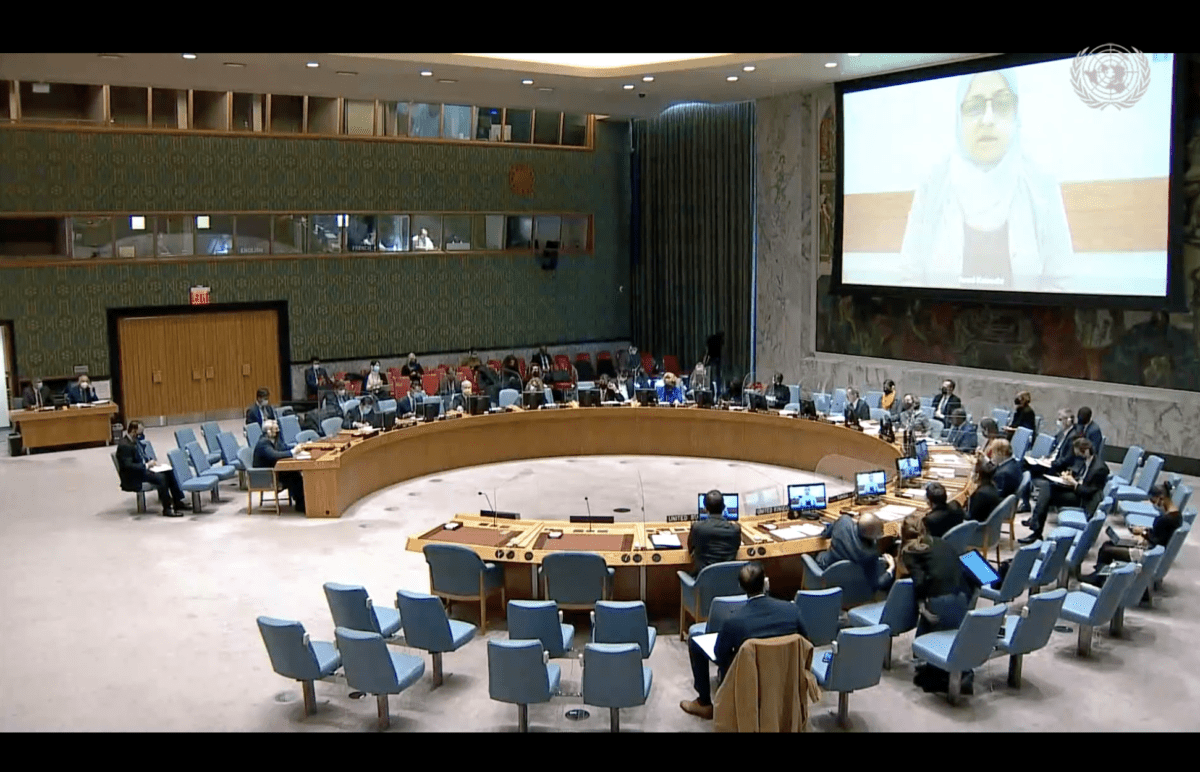 Amal Kabashi, Coordinator of Iraqi Women Network, was invited to provide a civil society perspective and recommendations when the Security Council met to discuss the situation in Iraq. The NGO Working Group on Women, Peace and Security facilitated her statement but she did not speak on behalf of the NGOWG.
Download PDF
عربى

I am Amal Kabashi, representative of the Iraqi Women Network, which was established in 2004 as a civil society feminist alliance. The Network includes more than 100 local organizations from all over Iraq. I have played a prominent role in drafting the first National Action Plan (NAP) for Resolution 1325 and in preparing the second NAP (2021–2024), which focuses on the role of Iraqi women in achieving stability, security and peace, as well as combating terrorism and extremism.

As a feminist activist and defender of women’s rights, I would like to share with you my growing concerns about the assassinations, kidnappings, assaults, threats of assassination against and defamation of feminist activists and human rights defenders, which they have faced especially during the popular protests in October 2019–2020, all of which have occurred with impunity.[1] Over the last two years Iraqi women have faced daily challenges in realizing their full, equal and meaningful participation in establishing peace and securing protection from violence in Iraq.[2]

In my statement, I will focus on three key issues that must be addressed to end this cycle of discrimination and exclusion against Iraqi women.

First, the elections and the present negotiations for forming a new government are both critical for ensuring women’s meaningful participation and promoting democracy in Iraq.

The early elections in Iraq last month were organized in response to the demands of the peaceful protests that shook the country from October 2019–2020. Women played a key role in these protests and defied social norms in order to do so.[3] Protestors were confronted with excessive use of force that left over a hundred dead and thousands wounded.[4] Despite the boycott of the elections that followed, they proceeded under wide monitoring by the United Nations (UN) and the European Union.[5] 3,240 candidates, including 951 women, participated in the elections to compete for 329 seats in the House of Representatives.[6] The elections resulted in the emergence of new and independent political movements. Moreover, many women candidates received thousands of votes, indicating the general electorate’s support for women’s political participation.[7] The results of the election may raise the percentage of women’s representation in the House of Representatives to more than 30%. Here, I would like to emphasize the critical role of and need for women as active participants in Parliament and in negotiations to form the new government. Their meaningful representation must also be reflected through an increase in the number of women in ministerial positions in order to ensure gender equality and equal opportunity, which the constitution affirms.

Second, while women’s engagement and increased participation in the electoral process is encouraging, an enabling environment for their participation is critical, as they still face serious barriers to doing so.

During the 2014–2021 parliamentary sessions we advocated for Parliament to pass a law against domestic violence. Despite the existence of such a law in the Kurdistan Region of Iraq, we did not succeed. This is due to the tyrannical mentality of many Iraqi legislators, who reject such efforts because they claim such laws unduly regulate family relations. Yet the Iraqi constitution guarantees protection from all forms of violence and abuse in the family, school and society.[8] These fundamental principles, as well as Iraq’s international legal obligations, require the establishment of national laws and regulations that protect women and girls from gender-based violence in all spheres of society.

This year has witnessed some encouraging legislation, such as the Yazidi Survivors’ Law in April 2021.[9] This law is part of the framework of transitional justice adopted by the Iraqi government to address the consequences of terrorism and violent extremism, and is in line with the content of the joint communique signed in September 2016 between the Iraqi government and the UN Special Representative of the Secretary-General on Sexual Violence in Conflict. However, the law focuses on providing material compensation to women survivors and does not take the necessary measures to institutionalize psychological, health and social services for the survivors and their children. The law also fails to address access to justice for survivors of gender-based violence and their children born to fathers affiliated with ISIS, particularly in terms of registering their births and obtaining civil documentation.[10]

There are also gaps in the government program to implement rehabilitation and support the integration of ISIS families into their local communities. This has a profound impact on the ongoing stigmatization of women and girls forced to join ISIS or marry their fighters.[11] The delay in resolving the situation of these families makes them ticking time bombs that threaten peace and societal security.

Stability in my country also needs strengthened law and justice enforcement institutions that are gender-sensitive. This is essential for fighting impunity, corruption and militarism, all of which negatively affect women’s rights and women’s participation in promoting social cohesion, reconciliation and peacebuilding.

Third, a national mechanism to support inclusion of women is critical to ensure oversight of and adequate resources for implementing Iraq’s NAP on 1325. The absence of such a mechanism has contributed to the weakening of women’s participation in decision-making bodies, and in development programs.

We, as a national feminist movement, have called for the Iraqi government to form a National Council for Women’s Empowerment with representation of the government, Parliament and the Supreme Judicial Council, as well as civil society organizations concerned with women and media. This Council is needed to effectively lead work at the level of state institutions and local communities, realize the women, peace and security (WPS) agenda, and invest in Iraqi women’s potential to reform the political process and build a state of equal citizenship and social justice.

In closing, I urge the UN Security Council to:

Wille: Impunity for Killings Will Cast a Pall Over Iraq’s Elections, Human Rights Watch, 20 May 2021, https://www.hrw.org/news/2021/05/20/impunity-killings-will-cast-pall-over-iraqs-elections

[2] UNAMI, UN ESCWA and Iraq Foundation: Most comprehensive report to date on women’s participation in political life in Iraq: Challenges and ways to overcome them, Press release, 1 November 2020, https://reliefweb.int/report/iraq/most-comprehensive-report-date-women-s-participation-political-life-iraq-challenges-and