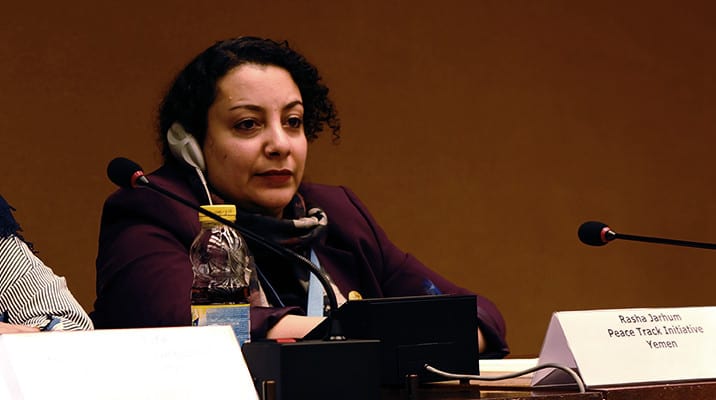 Rasha Jarhum, Co-Founder and Director of Peace Track Initiative and representative of Women's Solidarity Network, was invited to provide a civil society perspective and recommendations when the Security Council met to discuss the situation in Yemen in November 2018. She also briefed Member States at the March 2021 UN Security Council Open Arria-formula Meeting: Call to Lead by Example: Ensuring the Full, Equal and Meaningful Participation of Women in UN-led Peace Processes. The NGO Working Group on Women, Peace and Security facilitated her statements but she did not speak on behalf of the NGOWG.
Download PDF
عربى

Thank you for the opportunity to speak today about the importance of women’s participation in peace and security by sharing the example of my own country, Yemen. I am Rasha Jarhum, co-founder and Director of the Peace Track Initiative. Today, I brief you on behalf of my organization and the Women Solidarity Network, which together represent more than 300 Yemeni women leaders.

When the war broke out in Yemen seven years ago, we feared a protracted conflict. We had to focus all our efforts on building peace. Our members have stepped in to facilitate local ceasefires and mediate an end to conflicts over water and land.[1] In Taiz, our members have negotiated opening humanitarian corridors and undertaking evacuations, sometimes tiptoeing around landmines and dodging sniper bullets to bring food to families trapped in crossfire.[2] Our members, like the Mothers of Abductees Association, have contributed to releasing almost a thousand arbitrarily detained civilians.[3] Yemeni women also actively participated during the national dialogue conference led by the UN in 2013, securing women’s participation by almost 30%, and contributing to a landmark package of rights that included a 30% quota for women in all state levels.[4]

However, despite the leading role Yemeni women have played in working towards peace, we were subsequently excluded from peace negotiations held in Kuwait in 2016 and Stockholm in 2018, as well as all the committees established thereafter.[5] Today, women are completely excluded from Track I diplomacy and their participation is limited to a tokenistic role on the sidelines as advisors that are not meaningfully consulted. Women have also been completely excluded from the formation of the new government. This contradicts the national dialogue outcomes and represents a historic failure as it is the first cabinet in two decades with no women.[6] It also contradicts the Yemeni government’s own Women, Peace and Security National Action Plan, launched last year, which calls for women’s inclusion.[7]

Despite the Secretary-General’s call for a global ceasefire, which was welcomed by all the conflict parties,[8] arms have continued to flow into the country and hostilities have escalated,[9] including in Mareb, where a Houthi offensive has disproportionately affected women and girls and caused widespread displacement. Although Yemeni women’s organizations first sounded the alarm for a ceasefire to address COVID-19,[10] our requests to obtain the draft of the ceasefire agreement in order to support these efforts were rebuffed under the pretext of safeguarding the fragile peace process. The draft was not even shared with the Yemeni Women’s Technical Advisory Group.

We have heard all types of patriarchal excuses justifying women’s exclusion — excuses that question our qualifications, our legitimacy, our ability to represent our constituencies, our agency and our very right to participate in public life. However, the most frustrating justification of all is that including women will upset the negotiating parties and disrupt a fragile peace process. When we point to Resolution 2451 (2018), which underlines the importance of women’s full participation, or refer to Yemen’s obligations under the Convention on the Elimination of All Forms of Discrimination against Women (CEDAW), we are told that ending war comes before fulfilling our human rights. We hear these excuses not only from our own government, but also from the UN and supportive Member States. As mediators, we understand the challenges involved in mediation. As activists dedicated to peace, we recognize the important efforts made and share the same goal of ending conflict. But to appease conflict parties who have shed blood to advance their narrow political gains over an inclusive peace process and women’s rights, directly contradicts the fundamental premise of Resolution 1325 (2000). Without women, and without gender equality, peace is not an attainable goal.

In Yemen, we learned that exclusion from the UN-led peace process helped legitimize women’s exclusion in other spaces. We also learned that a lack of political will combined with zero accountability meant that nobody could be held responsible for ensuring women’s participation. We believe that the UN can play an important role in changing this unacceptable status quo not only in Yemen, but around the world, by using its influence and resources to make the peace processes it supports more inclusive. This would send a strong message to Member States, national governments and conflict parties that the UN’s value of equality is not negotiable and will never be compromised for an expedient political solution.

An additional key challenge to women’s participation in both Yemen and in other fragile countries today, such as Iraq, Libya or Afghanistan, is retaliation for participating in public and political life, for advocating for human rights or engaging in other activities contributing to peace. Today, the violations and abuses against women and girls in Yemen have reached a level never witnessed before.[11] As noted by the Group of Eminent Experts, sexual violence is used against women and girls by all parties to the conflict. The Houthis in particular have arbitrarily detained, tortured and repeatedly raped women and girls who oppose them.[12] Some of these women have been targeted simply for participating in demonstrations against hunger or calling for disbursement of their salaries. In November 2020, the Houthis also issued death sentences against 91 civilians,[13] such as journalists and political leaders,[14] including Dr. Nadia Al-Sakkaf,[15] a member of the Women Solidarity Network.

Here, we thank the Security Council for including an individual responsible for, and I quote, a “policy of intimidation and use of systematic arrest, detention, torture, sexual violence and rape against politically active women” on the sanctions list last month.[16] You have taken an important first step towards bringing justice to hundreds of Yemeni women and addressing a life-threatening obstacle to our ability to participate in defining the future of our country.

To build lasting peace in Yemen, we urge the Council to support an inclusive, transparent and accountable peace process ensuring multi-party participation, and ensure the meaningful participation of women, youth and civil society of all political backgrounds from all regions of Yemen, including the South, in all diplomatic tracks and stages of the peace process. We also urge the Council to support the protection of women, including women political leaders, and call for immediate release of those who have been arbitrarily detained.

To mark the 20th anniversary of Resolution 1325 (2000) last year, over 500 civil society groups worldwide endorsed the NGO Working Group on Women, Peace and Security’s open letter calling for women’s participation to be a requirement in UN-led peace processes. Today, you have an opportunity to heed our collective calls for action and make historic change to advance women’s rights.

Let us not lose our fierceness in working for gender equality and justice and not compromise women’s rights.

Thank you and I look forward to today’s discussion.