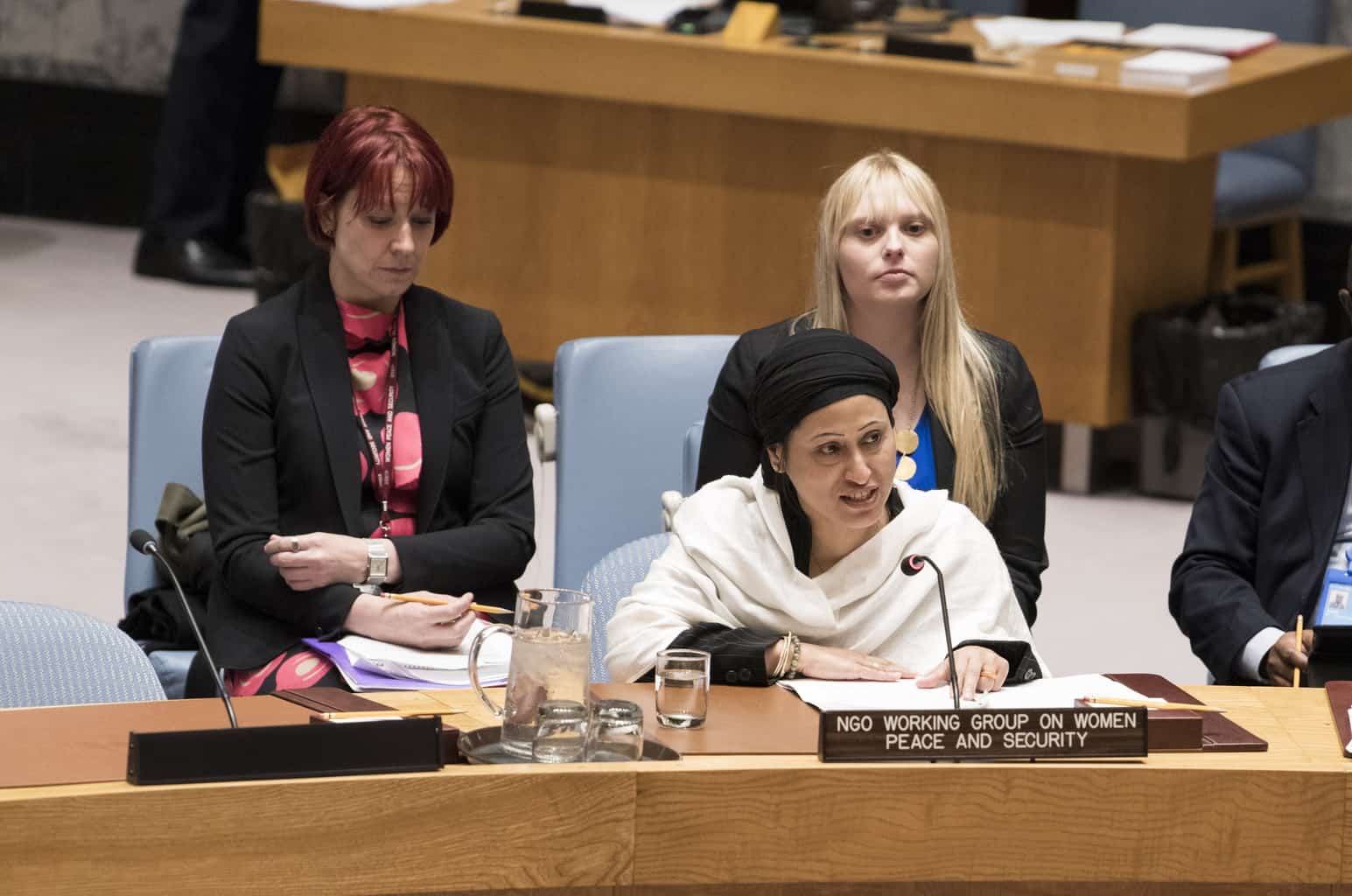 This statement was made by Ms. Razia Sultana, Senior Researcher with Kalandan Press, a coordinator of the Free Rohingya Coalition, Director of Arakan Rohingya National Organization’s women section and the founder of Rohingya Women Welfare, on behalf of the NGO Working Group on Women, Peace and Security, at the United Nations Security Council Open Debate on Sexual Violence in Conflict. In her statement Razia Sultana outlines her research documenting the widespread and systematic use of sexual violence by the Myanmar army against Rohingya women and girls and other ethnic minorities, emphasizing that the Security Council should have prevented this latest crisis that has forced over 670,000 Roghingya to flee to Bangladesh since August 2017. She calls for an urgent increase in aid to address the humanitarian situation for those who have fled to Bangladesh and for rule and law, accountability and human rights to drive the international response.

I am a Rohingya lawyer, researcher, and educator specializing in trauma, mass rape, and trafficking of Rohingya girls and women. I have been working directly with Rohingya women and girls in the refugee camps in Bangladesh since 2014. As a senior researcher, I have worked with Kalandan Press on a few reports. I am coordinator of the Free Rohingya Coalition, Director of Arakan Rohingya National Organization’s (ARNO) women section, and the founder of Rohingya Women Welfare (ROWW).

Since August last year, over 670,000 Rohingya have fled Myanmar. This is the fastest refugee movement since the Rwanda genocide. I am extremely grateful to Bangladesh for opening its borders. However, the international community, especially the Security Council, has failed us. This latest crisis should have been prevented if the warning signs since 2012 had not been ignored. Since then state security forces have committed human rights abuses against the Rohingya. Officials have since placed severe restrictions on our freedom of movement which limited access to livelihoods, healthcare, food, and education. Discrimination against Rohingya people dates as far back as 1982 when we were stripped of our citizenship rights.

Many of Myanmar’s other ethnic minorities including the Karen, Kachin, Chin, Mung, and Shan have also faced decades of entrenched discrimination, rape, and other human rights violations by the military operating with impunity. Other ethnic women’s groups in Myanmar have been documenting these patterns for decades. In 2002, Shan groups released a report with the same patterns of gang-rape, killing, and mutilation. In 2014, the Women’s League of Burma released a report documenting rape of over 100 ethnic women by the Myanmar Army. This showed how even after elections in 2010, the Myanmar Army was still raping ethnic women with impunity. What is happening now is only on a much larger scale.

My own research and interviews provide evidence that Government troops raped well over 300 women and girls in 17 villages in Rakhine State. With over 350 villages attacked and burned since August 2017, this number is likely only a fraction of the actual total number of women raped. Girls as young as six were gang-raped. Women and girls were caught and gang-raped in their homes, as they were running away or trying to cross the Bangladesh border. Some were horribly mutilated and burned alive. Sexual violence involved hundreds of soldiers and occurred across a vast part of Rakhine State. Such scale and breadth provide strong evidence that rape was systematically planned and used as a weapon against my people. The pattern of mutilation of women’s private parts after rape, suggests a specific directive to instill terror among Rohingya people but also to destroy their very means of reproduction. With hundreds of thousands of troops deployed across Myanmar, this has horrifying implications for the safety of women and girls across the country.

There are similar situations around the world, such as in Syria and Yemen. In Yemen, more than 3 million women and girls are at risk of sexual and gender-based violence. In Syria, the Commission of Inquiry has found that sexual violence carried out by Government forces and militias, formed part of widespread and systematic attacks directed against the civilian population.

Rohingya continue to flee today, and humanitarian organizations estimate that 60% of displaced Rohingya currently in Cox Bazar in Bangladesh, are women and girls. Had Bangladesh closed its borders, the situation would have been considerably worse. However, the international community and humanitarian agencies need to urgently scale-up health and protection services to support Rohingya refugees. This must include unhindered access to lifesaving healthcare services, mental and psychosocial care, and improved conditions of sanitation, water, and hygiene. Despite the acute need, post-rape care, including access to safe abortions and emergency contraception, is critically low in camps. Women and girls with disabilities and the elderly, face greater risks and needs which are not being addressed. There must be a faster registration process for NGOs with specialized humanitarian sexual reproductive health experience and in women’s empowerment and protection programming.

Of greatest concern to me are the increased incidents of young women being trafficked, some as young as12 years old. Young women and girls are either being kidnapped, or promised jobs or marriage offers and then disappear. Many see no future and are desperate to escape to a better life. They are easily trapped by false promises and then never seen again. There have also been cases of young teenage boys being taken. I am working on an awareness campaign for parents and community leaders to provide their girls with a protected environment.

Young Rohingya women have a vital role to play in this awareness raising and in coordinating humanitarian assistance in the camps. They should be encouraged to volunteer as they will be trusted by their community to relay vital information and at the same time will learn important leadership skills. Many young Rohingya women in the refugee camps want to help their people and be actively involved in the future of their community. They need to be supported and provided the necessary training to do so. It is time to empower our Rohingya women and girls with vision, respect and support whatever way we can.

Later this month, the Security Council will be visiting the refugee camps in Cox’s Bazar and then going to Myanmar. During this visit, you must meet with women and girl survivors. I could facilitate safe meetings. You must work with the Bangladesh authorities to stop the trafficking, pressure the Myanmar Government and senior officials to cooperate with the UN Fact Finding mission, and insist on unrestricted humanitarian access across Rakhine State.

Rule of law must drive the response to the Rohingya crisis. International pressure is urgently needed to end impunity in Myanmar and support political and legal reform, that ends the oppression of all ethnic peoples in Myanmar. Any return of refugees to Myanmar must be in accordance with international standards, and be safe, dignified and voluntary. As the Advisory Commission on Rakhine State recommended, and many members of this Council agreed, the Government of Myanmar must address the central questions of Rohingya citizenship, rights, freedom of movement, and equality before the law. My people must be guaranteed their safety upon return to Myanmar.

The Myanmar military is listed for the first time in this year’s Secretary General Report on Sexual Violence in Conflict. In light of this and the ongoing impunity of the army, the Security Council must refer the situation in Myanmar to the International Criminal Court without delay, for its horrific crimes against Rohingya, as well as for violations against other ethnic groups in the country, including in Shan, Karin, Kachin and other states.

It is hypocritical to condemn the human rights violations and express horror at the new violence, while then also selling arms to Myanmar and seek explorative licenses to mine its natural resources. Member States committed to conflict prevention and sustaining peace cannot turn a blind eye to state-sanctioned ethnic minority persecution, discrimination or other human rights violations including sexual violence, for trade. This applies to Myanmar and all crises elsewhere.

My statement today is not only for Rohingya women but for my other ethnic sisters who are also facing atrocities. Women community leaders from different ethnicities across Myanmar are working together to build inter-ethnic peace and community relations. We believe in a peaceful and united Myanmar for all ethnicities.