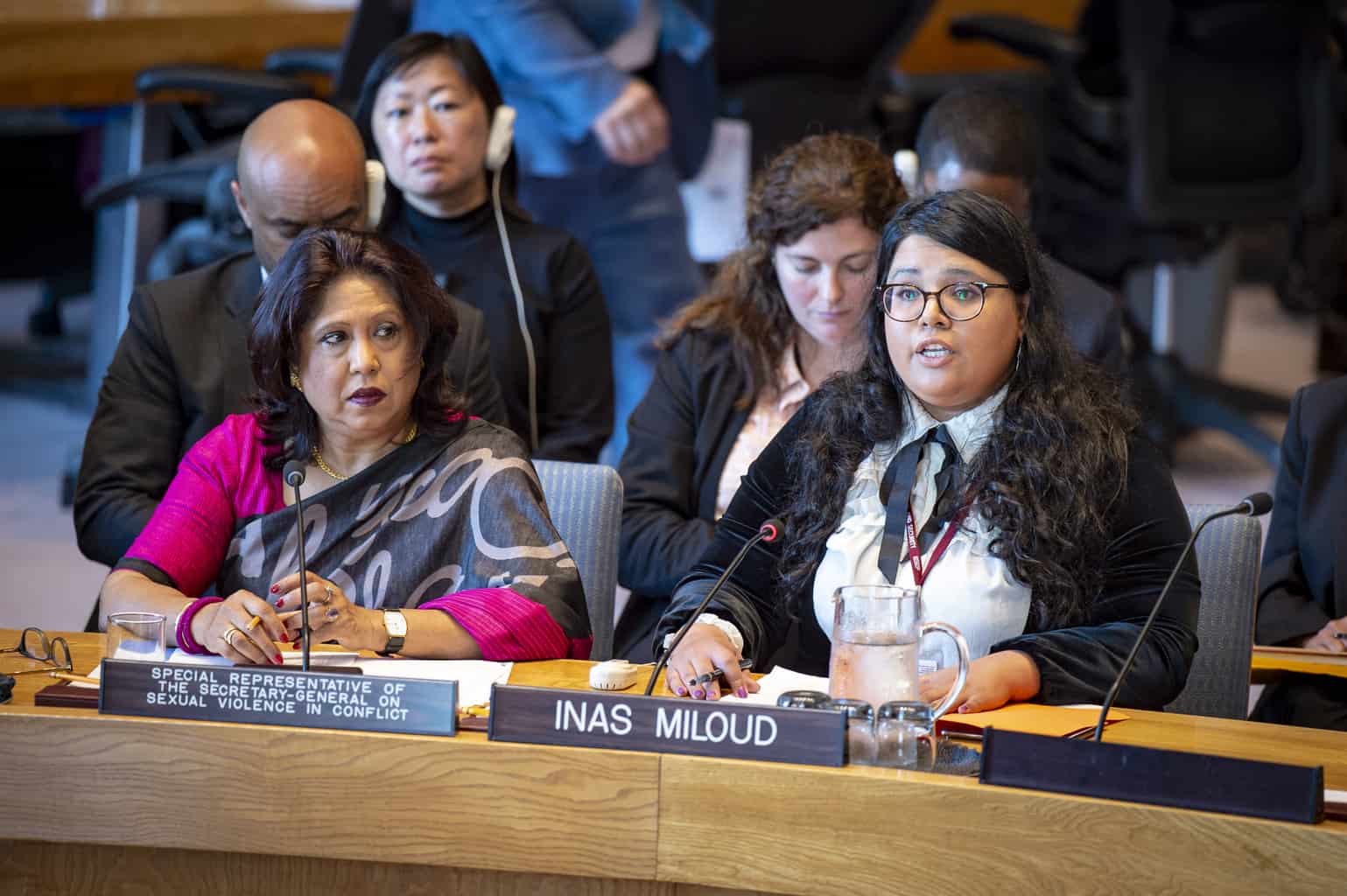 This statement was made by Ms. Inas Miloud, co-founder and director of Tamazight Women’s Movement, co-coordinator for the 1325 Network in Libya, and on behalf of the NGO Working Group on Women, Peace and Security, at the United Nations Security Council Open Debate on Sexual Violence in Conflict. In her statement, Inas Miloud outlines her personal and professional experience working with survivors of sexual and gender-based violence, as well as the threats facing women human rights defenders and indigenous people in Libya. She provides recommendations on how to address root causes of sexual and gender-based violence in conflict, including militarization and proliferation of small arms and light weapons, and prevent new cycles of violence.

I am Inas Miloud. My people are the Amazigh, or Berber, and we are the indigenous inhabitants of Libya. I was born in 1990 and grew up in Yefren, an Amazigh town in Nafusa mountains, about a hundred miles from Tripoli.

Since the 2011 revolution, I have been working with indigenous women and girls affected by sexual and gender-based violence, as well as displaced and migrant communities in Libya. Today I represent not only my people, the Amazigh, but all women in Libya. I speak in my capacity as the chairperson of the Tamazight Women’s Movement, an organization that undertakes research and advocacy on indigenous issues in Libya from an intersectional feminist perspective. I also speak today on behalf of the NGO Working Group on Women, Peace and Security.

Last week, the UN-supported National Peace Conference that was meant to put Libya on the road to democracy and elections had to be postponed. As UN Special Representative to Libya, Ghassan Salame, noted, you “cannot ask people to take part in the conference during gunfire and air strikes.”

Weeks into General Khalifa Haftar’s military assault on Tripoli, as the deaths of civilians mount, thousands flee, and the humanitarian crisis deepens, I think about my community, and not only the grave threats they currently face but the reality that they have had to live through for decades under the Gaddafi regime. In 2011, we took to the streets to demand our freedom, an end to repression, and our right to democracy. Yet eight years since the UN-brokered political agreement, my country remains embroiled in crisis and our hopes for change, dashed. The renewal of conflict in 2014 brought an increase in sexual violence and threats to women’s security, including widespread sexual torture of women and men, particularly internally displaced persons, indigenous and other minority communities, and women human rights defenders.

In 2018, we collected hundreds of stories from Libyans across the country about their experiences of sexual and gender-based violence, which primarily affects women and girls. The majority of testimonies provided by both men and women outline a common pattern of physical violence, rape, sexual harassment, verbal abuse, abductions and domestic violence.

Their stories highlight two indisputable facts. First, rigid, patriarchal norms, amplified by the presence of armed groups and the widespread availability of weapons, are the central cause of gender-based violence and lack of security for women. Second, gender-based violence exists on a continuum, from times of peace to periods of conflict, from public spaces to private lives.

Despite the UN arms embargo, weapons continue to flow into the country unchecked. Due to the widespread availability of weapons in every household, violence often escalates into a deadly outcome. Patriarchal notions of family honor, coupled with fear of retaliation, ensure that domestic violence as well as sexual and gender-based violence is rarely reported. Indigenous women are even further marginalized due to entrenched discrimination against our communities that has existed for decades.

Hundreds of indigenous women are targets of sexual and gender-based violence simply for belonging to communities such as the Toubou, Tuareg, and my own people, the Amazigh. In 2016, my friend was gang-raped by an armed group on her way from Tripoli to Nafusa Mountains with her brother. Five armed men stopped her car, started to beat her brother and then began to assault her. They told her that Amazigh women deserve to be raped.

I have known many others, both in my personal life as well as through my work, who have been the victims of gender-based violence, and their stories remain shrouded in silence. Chronic underreporting due to stigma, fear of retaliation, and a lack of trust in the judicial system fuels impunity for perpetrators on all sides of the conflict.

For many in Libya, internal displacement has become “a permanent feature of life.” 48% of the 1 million international migrants in Libya are women. Denied basic human necessities such as safe shelter, food and medicine, displaced women and young girls and boys are especially vulnerable to violence—they are abducted, raped, often multiple times, by different perpetrators, including by armed groups as well as state actors.

Sexual and gender-based violence is perpetrated in ways that impact both women and men. Men and boys are targeted, particularly in detention centers and prisons. In Libyan detention centers, a commonly reported torture technique involves forcing men to stand in a circle to watch the rape and sometimes murder of women. Men who move or speak out are beaten or killed. In most cases, there are no services to meet the needs of female survivors, let alone male survivors. One feature of the violence targeting men and boys, and a reason for its stigmatization, are the deeply entrenched assumptions about male invulnerability. Challenging harmful gender norms and attitudes applying to both masculinities and femininities is therefore essential for addressing the root causes of gender-based violence and militarization.

Like many Libyans, the revolution changed my life. Through the revolution, I learned what it means to be an activist and why that matters not only for other women, or my own people, the Tamazight, who have been denied social, cultural and political rights for centuries but for all Libyans.

The work of women human rights defenders remains essential for both protection of basic human rights and peace and security in Libya, as well as for providing life-saving services to survivors of sexual and gender-based violence such as food, medical care, and free counseling. However, attacks against them remain on the rise—over ten cases have been documented since 2017. Sexual and gender-based violence is systematically used to intimidate and silence women activists and political figures. Reprisals for our activism and criminalization of our work has led to severe restrictions on freedom of movement, assembly, and speech. Numerous women’s organizations have simply stopped working due to such harassment and threats.

Enabling women’s full participation in public life, as activists, politicians, or ordinary citizens, is an essential step toward challenging the deeply held beliefs about the roles of men and women—participation is, therefore, a necessary condition for adequately addressing sexual and gender-based violence against all groups.

Critically, the UNSMIL-led peace process largely excluded Libyan women and indigenous groups. As a result, the 2015 Libyan Political Agreement does not reflect many crucial issues, such as gender equality, sexual and gender-based violence, displacement, restrictions on freedom of movement, particularly of young women, and fear of reprisals for activism on women’s rights.

When UN Secretary-General António Guterres visited Libya earlier this month, while many meetings took place behind closed doors, there was no clear signal that civil society was invited to participate. This reflects a broader pattern of disengagement between ordinary Libyans and the UN-led peace process. You cannot build peace without building trust with our communities and having meaningful consultation with civil society.

Mr. President, last week, my cousin’s entire family was killed when their house was destroyed during the recent shelling in Tripoli. Theirs is just one example of the toll this conflict has taken on civilian lives. As bombs rain down on Tripoli and clashes continue in Alzizia and Zuwaya, ordinary Libyans now look to this Council to speak in a unified voice and take swift action to avert the current crisis and put Libya on the path to peace.

We call on the Security Council to:

In conclusion, as we approach nearly 20 years since the adoption of Security Council resolution 1325 (2000), I urge this Council to see the current situation in Libya as an important test of your credibility as the international community and what progress on this agenda really means for women, survivors and activists, and their communities suffering through conflict. Amina Megheirbi, a fellow Libyan woman human rights defender from Benghazi, sat in this very chair and delivered a statement at this open debate in February 2012. The fact that I deliver to you the same messages today as she did then should be a stark reminder that this Council’s efforts to bring peace to Libya have not been enough.

The Gaddafi regime not only repressed my people, the Amazigh, our culture and way of life but criminalized speaking the Tamazight language in public and forbade it from being taught in schools. Growing up speaking a banned language meant learning how to fight for my own freedom of speech from a very young age. It is, therefore, no small achievement that I address you today. Let these efforts not be in vain.