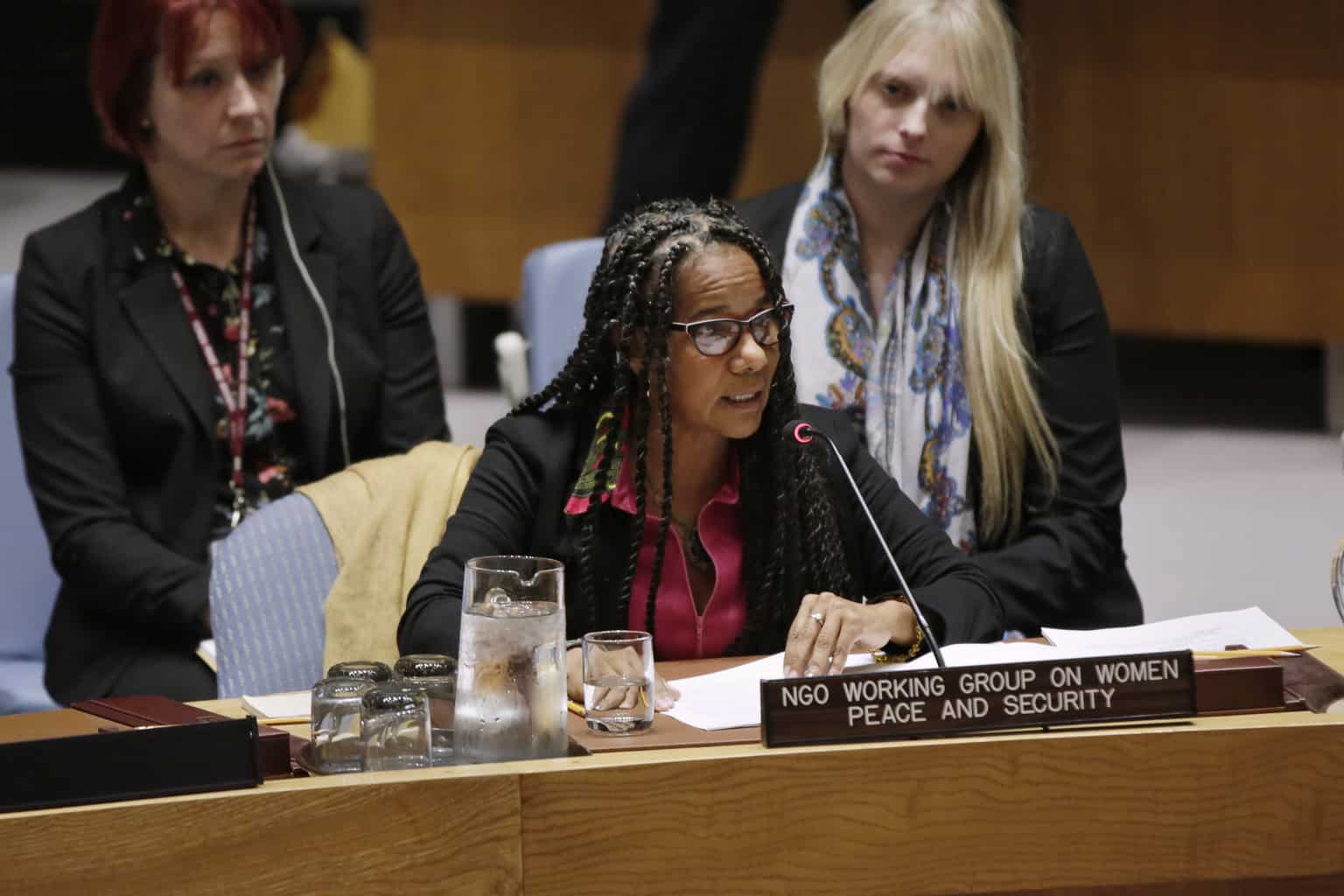 This statement was made by Ms. Charo Mina-Rojas, a member of the human rights team of the Black Communities’ Process, the Afro-Colombian Solidarity Network, the Black Alliance for Peace, and the Special High Level Body for Ethnic Peoples, on behalf of the NGO Working Group on Women, Peace and Security at the United Nations Security Council Open Debate on “Women and peace and security.” The statement highlights the participation of ethnically diverse women in peace negotiations; ensuring the security of human rights defenders, civil society activists and Indigenous and Afro-descendant communities; and inclusive monitoring and implementation of peace processes. Originally delivered in Spanish.

Good morning. I bring to you the traditional greetings of life, joy, hope and freedom, from the ancestral territories of Afro-descendant peoples in Colombia.

I speak today in my capacity as a member of the human rights team of the Black Communities’ Process, the Afro-Colombian Solidarity Network, the Black Alliance for Peace, and the Special High Level Body for Ethnic Peoples. I am also speaking on behalf of the NGO Working Group on Women, Peace and Security. I am a woman of African descent, and a peace and human rights activist who has spent half of my life educating and fighting for the cultural, territorial and political rights of Afro-descendant women and our communities and for our free-self-determination. It is an honor and a great responsibility to have been nominated by my global colleagues, to represent today the women and peace and security civil society community at this important debate.

I was extensively involved in the historical Havana peace process between the Colombian Government and the guerrilla group, FARC. Representing the Afro-Colombian National Council for Peace coalition (CONPA), I advocated to ensure that the rights and expectations of Afro-descendant peoples would be part of the Peace Accord that Colombia, and the world, celebrate today. I can speak first hand to the importance of inclusive negotiations and implementation processes, which support the participation of women from ethnically and racially diverse backgrounds and are emblematic of the goals and principles of Security Council resolution 1325 (2000).

Colombia has become a new source of hope because of the comprehensive peace agreement reached. Two provisions were particularly progressive and could bring radical changes to future peace processes around the world: one, the explicit inclusion of a gender perspective as an intersectional principle, and the second, the inclusion of the Ethnic Chapter which provides important safeguards to ensure the respect of autonomy and the protection and promotion of Indigenous and Afro-descendant peoples’ rights from a gender, family and generational perspective. The inclusion of these two specific principles is a historic advancement regarding peace and security that the UN and other countries experiencing violence and armed conflicts could learn from. The Peace Accord was very important for civil society and Indigenous and Afro-descendent people, and we continue to expect the engagement and active participation of women, ethnic groups, and their communities, in its implementation.

Colombia, however, risks wasting this opportunity for peace if it does not completely disarm itself and if the communities most impacted during the internal armed conflict, including women human rights leaders and activists, continue to be ignored in the implementation of the Peace Accord. I am here today to make visible their urgent calls and want to stress that for my people, it is actually a matter of life and death.

There are three urgent priority areas I want to focus on in my statement: participation of ethnically diverse women; ensuring the security for human rights defenders, civil society activists and Indigenous and Afro-descendant communities; and inclusive monitoring and implementation of peace processes.

First, is ensuring the ongoing participation of women, especially from diverse communities, in all areas relating to the implementation of the Peace Accord. As with women around the world, women in Colombia, and particularly Afro-descendant women, we have been mobilizing for decades to make visible the violations of our rights but also to ensure significant transformations in the way peace and security is approached. My dear sister Rita Lopidia from South Sudan was here last year giving testimony on the importance of South Sudanese women participating in ongoing peace and security dialogues. In Afghanistan, the few women on the High Peace Council need to continue fighting to have their voices heard. In Colombia, there is not a representative of Afro-descendant women on the High Level Body on Gender, the body that was established to oversee the implementation of the agreement’s gender chapter.

As parties to the Peace Accord work with the international community to demobilize FARC fighters, paramilitaries and other armed actors have filled the power vacuum left by FARC forces in many areas in Colombia. This has created an urgent need for local women’s organizations and community leaders to be consulted and participate in the design of local protection strategies to keep our communities safe. The Security Council and international community must support the Colombian government in designing and implementing gender-responsive, community based security and self-protection systems in consultation with Afro-descendant and Indigenous communities. The failure to listen to our security concerns and warnings has had devastating results.

This brings me to my second point, which is the need to guarantee our integral and collective security. Security involves the safety of leaders and communities and the respect and protection of territories and territorial rights. The proliferation of weapons is fuelling increased fear and forced displacement among largely Indigenous and Afro-descendent communities and negatively impacting on women’s participation and mobility, as well as resulting in increased sexual and gender based violence. We are alarmed at the increasing number of assassinations and threats to human rights defenders and peace activists across Colombia. For example, in Tumaco, a municipality near the border with Ecuador, urban leaders and members of the Community Council of Alto Mira and Frontera, continue to be targeted by paramilitary groups and FARC detractors who seek territorial control in order to grow and sell coca. Just last week, we buried Jair Cortés, the sixth leader killed in that municipality, and we had to urgently move out several women leaders and their families who received death threats.

Sexual and gender-based violence and the stigmatization that comes with it, especially for Indigenous and Afro-descendent women and their children, is also a matter of integral and collective security. The silence around these crimes is as appalling as the crimes themselves. Women activists risk their lives to bring cases before the justice system. There is an urgent need to establish a direct line of communication between Indigenous and Afro-descendent authorities and representatives of women organizations in all mechanisms of the Comprehensive System for Truth, Coexistence, and Non-Repetition to ensure these cases are prioritized, that perpetrators are brought to justice and survivors provided with lifesaving medical and psychosocial services.

Finally, it is crucial that the framework plan for the implementation of the Peace Accord includes specific goals and indicators designed to measure the progress and outcomes of policies, programs and reforms in a manner corresponding to the needs, values and rights of Indigenous and Afro-descendant peoples. It is critical that the Colombian government and its implementation commission (CSIVI) accept and integrate the ethnic perspectives and indicators, including the specific gender ethnic indicators, developed and provided to them by Indigenous and Afro-descendant organizations earlier this month. Political will on these indicators is needed, as is to include them in the legal framework of the Peace Accord. They will help effectively transform the war-like conditions preventing the well-being, social development and collective security of Indigenous and Afro-descendent women and our communities.

For Afro-descendant women in Colombia and Indigenous women leaders worldwide ensuring our collective security also means that the principles of free, prior and informed consent; consultation; autonomy; cultural integrity, and meaningful participation are respected and our human rights enshrined in national and international human rights standards are fully promoted and protected. Peace in Colombia and elsewhere, is not simply a matter of ending war and violence but addressing collectively the root causes of conflict including social, gender and racial injustice and promoting the well-being of all people of all races and religions. It is about supporting the efforts of local women activists to demilitarize and disarm our whole societies, and curbing the flow of small arms as prescribed in the Arms Trade Treaty and other legal instruments. It is the responsibility of all actors, including the Security Council, the UN system, regional and sub-regional organizations, and importantly, Member States, to fulfil their obligations. The women, peace and security agenda, if implemented and financially resourced, can be the pathway to peace in my country and around the world, where gender equality, women’s empowerment and protection of women’s rights are central to conflict prevention and sustainable peace.