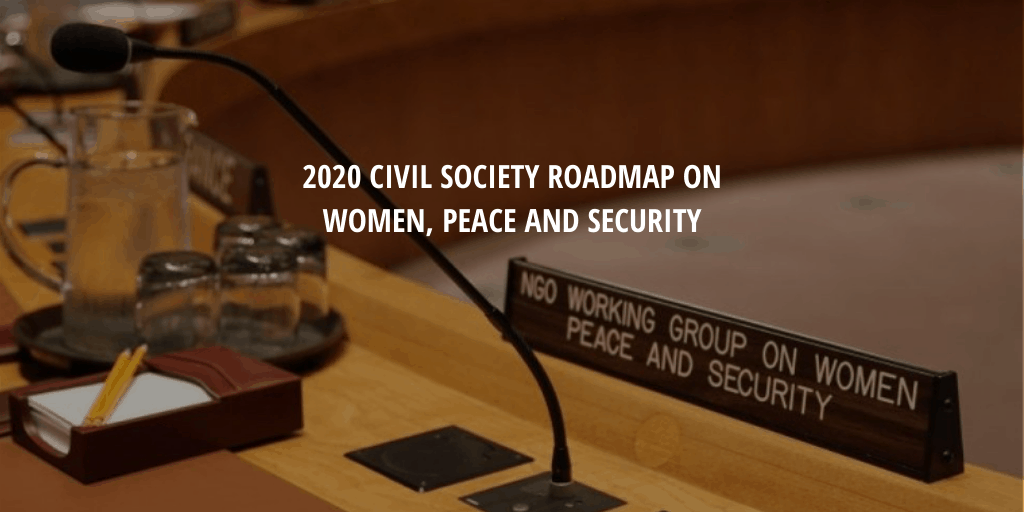 As the author, Rebecca Solnit has said, ‘hope is not a lottery ticket you can sit on the sofa and clutch, feeling lucky. It is an axe you break down doors with, in an emergency.’ The emergency is now.” 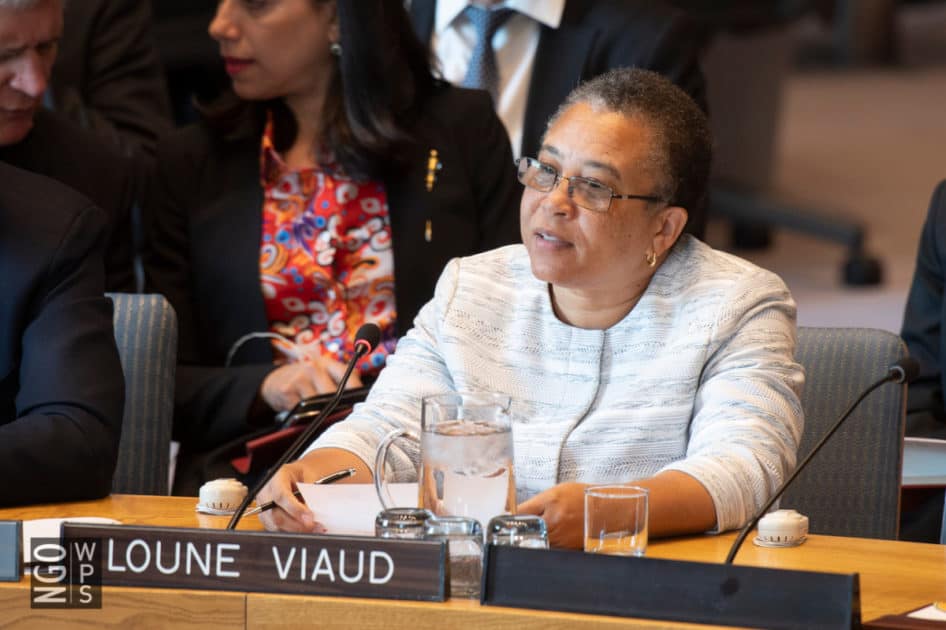 In October 2020, women activists, peacebuilders and human rights defenders along with UN Member States and agencies, will celebrate the 20th anniversary of the adoption of UN Security Council Resolution 1325 (2000) and the establishment of the WPS agenda.

20 years since the adoption of Resolution 1325, despite the fact that conflicts disproportionately impact the health, safety and human rights of women and girls, they remain excluded from decision-making processes that determine their future. Specific provisions on women and gender were almost universally absent from ceasefire and peace agreements resulting from UN-led or co-led processes in 2018. Nearly five years since the three peace and security reviews in 2015, only 50% of the recommendations on WPS directed towards the UN have progressed, and only two recommendations out of 30 were fully implemented (S/2019/800). Meanwhile, within the very bodies tasked with protecting human rights and maintaining international peace and security, we have witnessed increasing and direct attacks on core principles of international humanitarian and human rights law, including as they apply to sexual and reproductive rights, and sexual orientation, gender identity, gender expression or sex characteristics (SOGIESC).

As we highlighted in our Policy Brief 2018, the Security Council is far from meeting its WPS obligations 20 years since the inception of the agenda. Despite some progress, WPS is often tokenized and only addressed at the most superficial of levels.

Over the last 20 years, several studies have found that gender inequality is a key predictor of conflict and instability — gender inequality increases the likelihood of conflict, and countries with weak human rights standards “are more likely to have militarized and violent interstate disputes.”[4] A recent analysis found that 79% of armed conflict in situations for which there is data on gender equality took place in contexts with medium, high or very high levels of gender discrimination.[5] Relatedly, strong feminist movements are also predictors of, and contributors to, efforts that reduce gender inequality.[6] Addressing gender equality, as well as inequality more broadly, is therefore essential to preventing conflict, and requires, at its core, protection and promotion of human rights and efforts to address discriminatory structures and institutions.

In addition, as has been widely recognized and as we highlighted in our article on why women’s rights must be central to responses to COVID-19, the current pandemic is amplifying existing gender, racial, economic and political inequalities, and impacting those most marginalized, including people with diverse SOGIESC, people with disabilities, the elderly, the poor, and the displaced. Women are impacted due to their role as primary caregivers or healthcare workers and are often less likely to be able to meet their own needs due to structural inequalities. As for women and girls in conflict-affected communities, COVID-19 is likely to hit them harder — as recognized by the UN Secretary-General, there has been an alarming surge in gender-based violence (GBV); combined with restrictions to essential services, such violence compounds existing risks for women and girls.[7] The current pandemic underlines why preventing all forms of GBV against women requires ensuring the autonomy of those who are targeted and the full scope of their human rights, as well as the importance of enabling them to lead and contribute to the solutions to the crisis, rather than only seeking to protect them from violence.

The upcoming anniversary of the WPS agenda must be a call to action to the UN, Security Council and Member States to redouble their commitment to fully implement and advance the WPS agenda, defend the full scope of human rights, and galvanize efforts to address clearly identified gaps.

As a coalition dedicated to peace, gender equality and women’s rights, we firmly believe that the following six principles should guide any action:

Every conflict and crisis has specific gendered dimensions.
There is no situation in which gender equality and women’s rights are not relevant. We advocate for the systematic incorporation of gender analysis and WPS obligations, including as enshrined in the ten WPS resolutions,[8] in all conflict and crisis work, particularly within the country-specific discussions on the Security Council’s agenda, not only in thematic discussions on WPS.
Gender equality and human rights are legal obligations in conflict-affected situations.
Violation of human rights must be recognized as an early warning sign and a root cause of conflict. The WPS agenda is both a peace and security issue, and a critical part of the human rights agenda. We therefore advocate for a rights-based approach to addressing all dimensions of the WPS agenda and for clear and outspoken leadership by the UN, Security Council and Member States on the importance of gender equality and human rights in maintaining peace and security.
We cannot achieve sustainable peace without the full, equal and meaningful participation and leadership of diverse women in all levels of decision-making.
There is no substitute for direct participation of women in all aspects of peace and security, yet civil society continues to be regularly consigned to observer or other ad hoc roles despite the Global Study on the Implementation of Security Council 1325 (2000) specifically calling for an end to this practice.[9] In addition, although parity in representation is an important first step in addressing gender inequality, it is not the fulfillment of feminist leadership, nor is it a substitute for fully implementing all components of the WPS agenda. Ensuring meaningful participation also requires dismantling the barriers to participation for the majority of women, not just supporting a small number of women to reach leadership positions.
An intersectional approach to gender equality is fundamental to the WPS agenda, and to the NGO Working Group’s (NGOWG) work.
We recognize that race, ethnicity, religion, class, SOGIESC, age, marital status, pregnancy status, disability, migratory status, geographic location, economic status and other characteristics can be sources of both oppression and resilience, and intersecting forms of discrimination reflected in structural barriers must be recognized and addressed in order to achieve gender equality and the vision of the WPS agenda. Yet women are primarily referred to as a monolithic group throughout the work of the Security Council — our analysis showed that the experiences of particular groups of women and girls comprised less than 7% of all references in outcome documents and 6% of all references in reports of the Secretary-General in 2019, reflecting little acknowledgment of the unique challenges they face. Enabling the participation of diverse women — representative of a range of backgrounds and identities, including women with disabilities, women of diverse sexual orientation and gender identities, as well as women of diverse ethnic, cultural and religious backgrounds — is critical in order to ensure gender equality, and that “women” are not treated as a homogenous group.
Civil society, including conflict-affected communities, peacebuilders, women-led and women’s rights organizations, and human rights defenders, are an integral part of the WPS agenda.
Ensuring full and meaningful participation of diverse civil society organizations and representatives requires timely, systematic, transparent, inclusive, and substantive consultation in formal and informal processes in order to ensure that any action addresses clearly identified gaps and delivers real change to communities affected by conflict.
Without real accountability, there can be no real progress.
As was highlighted by all three peace and security reviews undertaken in 2015[10] and reinforced by the independent assessment commissioned by the UN in 2019, greater accountability of all actors, particularly senior UN leadership and Member States, is a requirement for real progress on the WPS agenda. This requires fundamental recognition that addressing gender inequality is both an international legal obligation and a collective responsibility of the UN. Prioritizing and resourcing for women’s human rights, establishing clear standards for performance and implementation, as well as raising the cost of failure to implement, are essential for driving forward the WPS agenda.

With the above principles in mind, below we share concrete recommendations on how the UN, Security Council and Member States can advance WPS in five key areas in advance of the 20th anniversary of the adoption of Resolution 1325.

To the Security Council

In Response to COVID-19